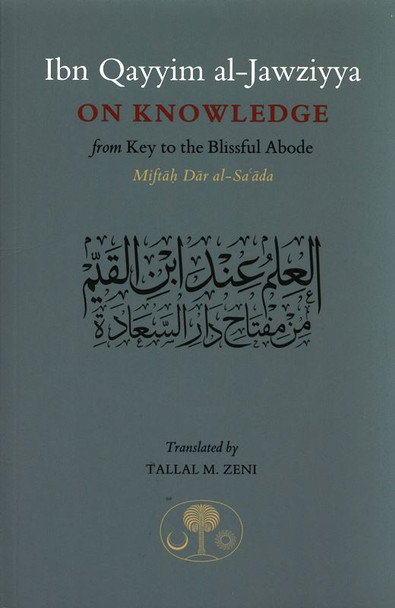 The renowned theologian and jurist Ibn Qayyim al-Jawziyya wrote numerous titles, many of which are still popular today. Amongst these is Key to the Blissful Abode (Miftaḥ Dar al-Sa’ada). The present work is an abridgement of the first volume of Key to the Blissful Abode. In it, Ibn Qayyim focuses on the importance of knowledge and willpower, as means through which a person may attain Paradise. Willpower is the door and knowledge – in particular knowledge which pertains to God and His Attributes, the Qur’an and the example of the Prophet – is the key. Ibn Qayyim discusses the virtues and benefits of knowledge over wealth and worldly matters; the path to knowledge; the importance of pursuing knowledge and applying it in order to achieve guidance from God and protect oneself from doubts; the superiority of the scholar over the worshipper; the necessity of using knowledge and willpower as the bases for all actions if one is to achieve spiritual bliss. Ibn Qayyim then concludes by discussing the importance of contemplation and reflection in order to attain further knowledge and guidance. Ibn Qayyim al-Jawziyya was born in 1292 near Damascus where he obtained a classical Islamic education and specialised in jurisprudence. In 1312, he met the Hanbalite reformer Ibn Taymiyya and remained his disciple until the latter’s death in 1327. Ibn al-Qayyim died in 1350 in Damascus. Among his other works translated by the Islamic Texts Society are Medicine of the Prophet and Ibn Qayyim al-Jawziyya The Invocation of God. Tallal M. Zeni is a medical doctor who has studied traditional Islamic culture. This is his first translation.
View AllClose

MSRP:
Now: £5.95
Was:
Travelling in the Pursuit of Knowledge Before you is the English translation of the classical treatise al-Rihla fi Talab al-Hadeeth by the great scholar of the Shafi’i school of jurisprudence and...
23436