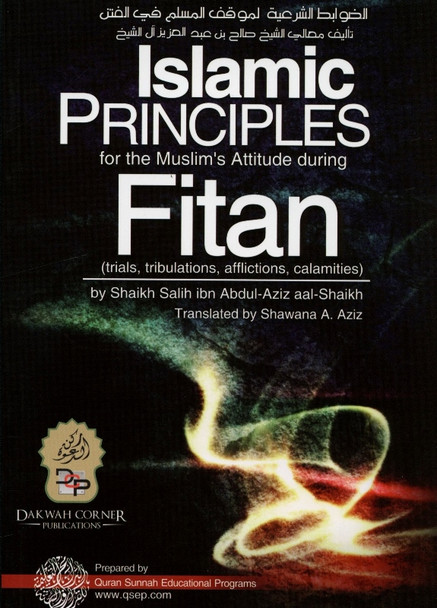 By: Shaikh Salih ibn Abdul-Aziz aal-Shaikh Translated by: Shawana A.Aziz SL: 000000
Trials, tribulations, afflictions, calamities are just few meanings that fall under the word, 'Fitan' concerning which Allah says, "Fear the Fitna, which affects not only those of you who do wrong (But it may afflict everybody). " Surah al-Anfal 8:25 - and in such testing situations, if a Muslim was to let loose his thoughts without any principles and rules to base his opinions upon- his mind will wander into different directions effecting his behaviour towards his own-self, his family and society. But observing rules and principles; - Restrains a Muslim's opinion to the values and ethics of the Sharee'ah. - Protects his thoughts from being effected by those ideas and views which the Sharee'ah does not approve of, thus encouraging appropriate attitude towards his self, his family and society. In this book, Shaikh Saleh aal-Shaikh explains: - how a Muslim should THINK and BEHAVE. - how he should WEIGH and JUDGE people/situation. in difficult and challenging times and situations - KEY RULES, which You can use in Your Daily Life too.
View AllClose

The Islamic Creed & its History

Master The Miracles Of The Quran In 10 Days

MSRP:
Now: £13.50
Was:
Purity of Faith 19B A new translation and commentary of Kitab at-Tawhid The order to live one’s life in accordance to the dictates of Tawhid, monotheism, is the single most important injunction...
23109

MSRP:
Now: £40.00
Was:
MOCHA BATWING ABAYA     Featuring a round neckline, this abaya although simple will meet your expectations for your everyday comfort. This dress features a loose batwing cut fitting with...
22841