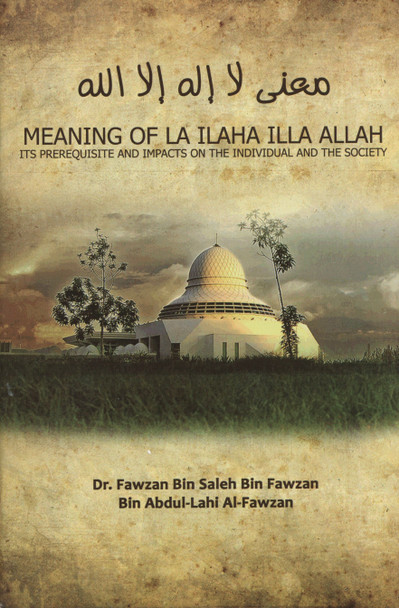 It was reported from the Prophet PBUH that he said, The best supplication is the supplication on the day of Arafah, the best that anyone can say is, Laa Ilaha Illa Allah, Wahadau laa sharika lahu, lahul mulk, wa lahul hamdu, wa huwa ala kulli shayin qadiir.

Meaning, none is worthy to be worshipped except Allah, He has no partners, majesty belongs to Him, praise belongs to Him and he is powerful on all things. (Reported by Tirmidhi)

MSRP:
Now: £11.95
Was:
La Ilaha Illa Allah: It's Meaning, its Conditions, Nullifiers and Virtues SL: 01AL2 Verily, the foremost matter individuals should put to effect is: To learn the purpose for which Allah created...
22814

The Key To The Abode of Peace

An Explanation of the Treatise: The Meaning of the Statement of Tawhid (La ilaha illAllah)

MSRP:
Now: £2.00
Was:
An Explanation of the Treatise: The Meaning of the Statement of Tawhid (La ilaha illAllah) 16A The objective of the statement La ilaha illAllah is not saying it with the tongue only without...
23181

MSRP:
Now: £5.95
Was:
Adornment Of Women SL: 00000 In the era of weight training, diet centres, cosmetic surgeries, permanent eye make-ups, collagen injections, and other latest wonders of beauty arts, many would find...
21943

MSRP:
Now: £17.95
Was:
The Noble Quran : Filipino / Philippines Translation SL: 05AL3 / SL: 05BL3 Filipino language translation of The Noble Quran with side by side Arabic script and tafsir (explanation) on the bottom...
22348

How Can The Muslimah Obtain The Sweetness Of Eemaan

MSRP:
Now: £3.95
Was:
How Can The Muslimah Obtain The Sweetness Of Eemaan SL: 00000 Umm Ahmad (may Allah preserve her) said that we should look to our friends and see if they increase us in Eemaan (faith) or decrease...
21953