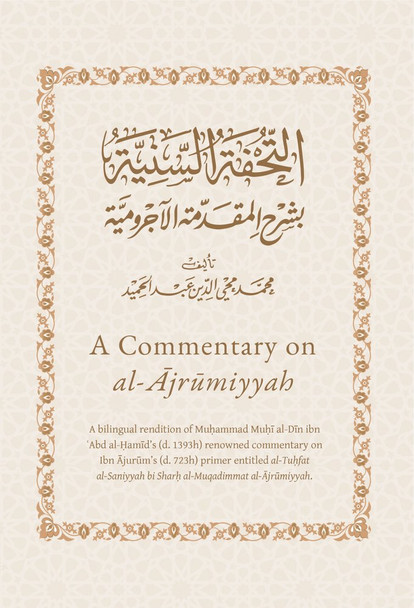 A full bilingual rendition of Muḥammad Muḥī al-Dīn ibn ʿAbd al-Ḥamīd’s (d. 1393h) renowned commentary on Ibn Ājurūm’s (d. 723h) primer entitled al-Tuḥfat al-Saniyyah bi Sharḥ al-Muqadimmat al-Ājrūmiyyah with supplementary notes from other commentaries. ʿUmar bin al-Khaṭṭāb (ra) said, “Learn the Arabic language, it will produce intellect and increase you in respectable behaviour.” [Shuʿab al-Īmān of al-Bayhaqī, 1551] Ibn Ḥazm said, “Anyone who seeks knowledge of naḥw and the Arabic language with the intention of implementing the Sharīʿah and understanding the Words of Allah, the Most High, and the words of His Prophet, and to have a broader understanding of the religion; then this person will have a great reward and a lofty status by which he will not be surpassed by anyone.” [Rasāʾil ibn Ḥazm 3/162] Al-Suyūtī said, “Those who explained this book (al-Ājrūmiyyah), such as al-Makūdī, al-Rāʿī and others, have described its author as being an imām in naḥw, and possessing many blessings and benefits. An example of this is his Muqadimmah which has been extremely beneficial for beginners in studying naḥw.” [Bugyat al-Wu’āt fi Ṭabaqāt al-Lughawiyīn wa al-Nuḥāt 1/238] Ibn Ḥāj said, “Proof that this book is beneficial is that Allah has given it acceptance, to the extent that this has become the very first book (for beginners) that is studied prior to the commencement of reading the Qurʾān al-Aẓīm. This Muqadimmah will give you benefits and understanding in the shortest time possible.” [al-Taliqātu al-Jaliyyatu ʿalā Sharḥ al-Ājrūmiyyah, p. 43]
View AllClose

MSRP:
Now: £3.50
Was:
Conditions Of LAA ILAAHA ILLALLAH The famous Taabi’i Wahb ibn Munabbih was once asked, “Isn’t the statement of laa ilaaha ill-Allah the key to Paradise?” He answered, “Yes, but every key has ridges,...
23774

MSRP:
Now: £10.00
Was:
The Holy Qur'an for School Children: Juz 'Amma - Part 30 This is a complete textbook for learning and understanding the last part (juz) of the Holy Qur'an. Every surah is presented with an...
23713