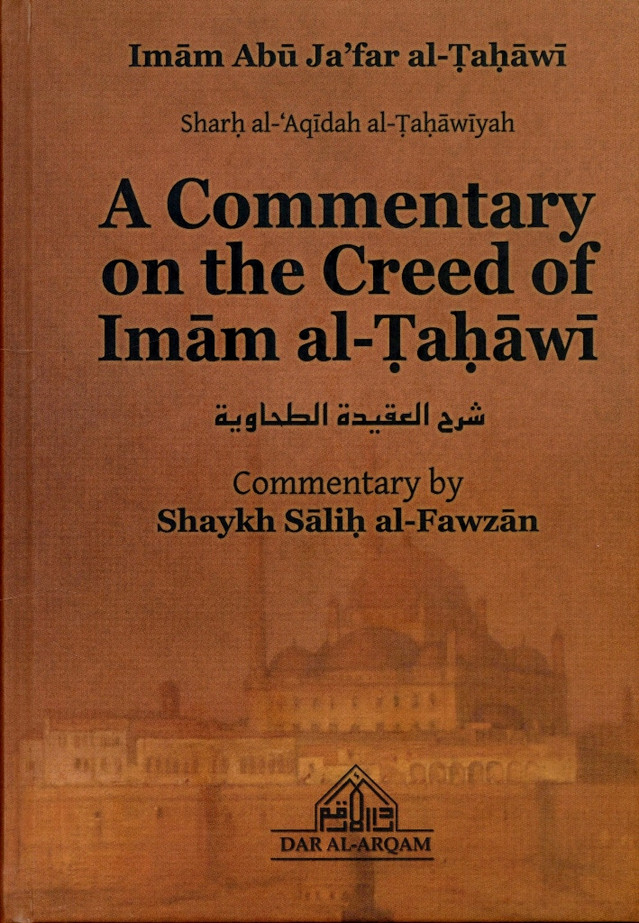 SL: 00000
A commentary by Shaykh Salih al-Fawzan on al-Aqidah al-Tahawiyyah, the most widely acclaimed and accepted work on the creed of Ahlus Sunnah wal-Jama'ah. Before you is the English translation of Sharh al-‘Aqidah al-Tahawiyah by Shaykh Salih al-Fawzan. This is an explanation of the renowned treatise on the Islamic creed entitled al-‘Aqidah al-Tahawiyah (The Creed of Imam al-Tahawi). The author of this treatise is Imam Abu Ja‘far al-Tahawi (239-321 A.H.), one of the leading authorities on the Hanafī madhab. The period Imam al-Tahawi lived in was the zenith of the dissemination of the Islamic sciences and he was just one of the giants that this era produced. To illustrate this: his teachers included Imām Isma’il ibn Yahya al-Muzani (a major student of Imām al-Shāfiī), those he collected hadith from included Imām al-Nasai (author of ‘Sunan al-Nasai’, one of the ‘Sahih Sittah’) and his students included the great muhaddith Imām al-Tabarani. The purpose of his treatise was to state the creed of the early scholars of the Hanafī madhab and to indicate its correlation with the views of Ahl al-Sunnah wa’l-Jamā‘ah in general. As Shaykh al-Fawzan states in his explanation: “This entails a refutation against those who associate themselves with the Hanafī school of fiqh in modern or recent times: They associate themselves with the Hanafī school but contradict Imam Abū Hanīfah in creed; rather they only follow his views in jurisprudence. They adopt the creed of those who profess kalām (theological dialectic) and the logicians.
View AllClose

MSRP:
Now: €5.86
Was:
The Prophet At Home 10B The Following treatise " The Prophet at Home" is extremely needed today, especially when very few are concerned with the tarbiyyah of their homes and family. In response...
21409

MSRP:
Now: €15.39
Was:
Gateway to Arabic Book Three Audio CD : Set Of Four Audio CD's SL:10A Read by: Dr. Imran H. Alawiye and Zaynab Alawiye This set of four audio CDs contains a reading of the materials in Gateway to...
21418

Noor Kids :Do You Promise

MSRP:
Now: €5.86
Was:
In this book, we teach the importance of being honest with our words. Islam strongly encourages us to be honourable by keeping our promises. It is strongly disliked by Allah (SWT) when on makes a...
21419

MSRP:
Now: €14.21
Was:
The Valley Came Alive : From Al - Bidayah wan - Nihayah 25B Darussalam is proud to present the abridged English translation of the classic work: Al-Bidayah wan Nihayah, focusing exclusively on...
21556

MSRP:
Now: €5.86
Was:
Mustalah Al-Hadith 15B The rules and terminology of the science of Hadith By: Ash-Shaykh, Al-Allaamah Muhammad bin Salih al-Uthaymin
22446

MSRP:
Now: €4.74
Was:
The Biography Of Imam Ahmad bin Hanbal 05DL3 Imam Ahmad ibn Hanbal is remembered for many things. He was an Imam in Fiqh, Hadith, and many other sciences. In fact, his madh-hab is one of the four...
22930

MSRP:
Now: €7.11
Was:
The Biography Of Imam saeed bin Al Musayyab 05DL3 This book is a biography of the chief of At-Tabiieen and the leader of the Muslims in his time Imam Saeed bin Al-Musayyab - may Allah have...
22963

The Biography of Imam Shawkani