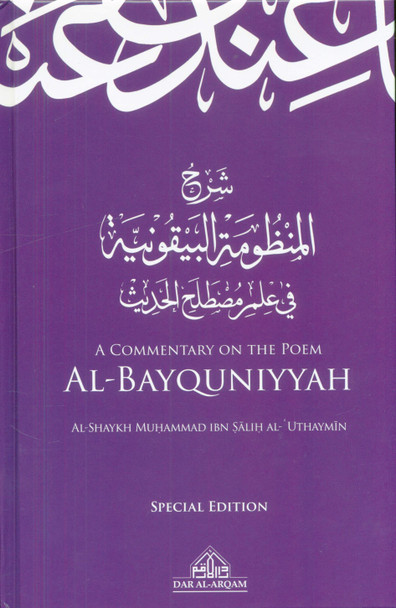 A Commentary on the Poem of Al-Bayquniyyah

A commentary on the famous poem in the field of hadith sciences entitled al-Manzumah al-Bayquniyyah by Shaykh Muhammad ibn Saalih al-Uthaymeen (rahimullah). The Merits of the Poem of al-Bayqūnī: Shihāb al-Dīn al-Dimyāthī said, “The poem of the knowledgeable imām of understanding and perception, al-Shaykh al-Bayqūnī (rahimullah) is one of the most interesting summaries of the science of hadīth and the most eloquent of the writings upon which one takes the rigorous course upon, for it is comprised of clear yet fine expressions that overwhelms its counterparts with a grim face.” The importance of this subject: The knowledge of usūl al-hadīth is a science that serves the radiant Prophetic traditions; with it one can distinguish the Prophetic narrations in terms of authenticity and fabrication, soundness and weakness. Al-Imām ‘Abdullāh ibn al-Mubārak said, “The quality of the hadīth is not in the conciseness of the isnād, rather its quality lies in the soundness of its narrators." Al-Imām Yahyā ibn Sa`īd al-Qattān said, “Do not look at the hadīth but rather look at its chain. If the chain is sound [then the narration is sound]. If not, then do not be deceived by the narration with a chain that is not sound.” Al-Hāfiz ibn Qutaybah al-Daynūrī said, “There is no nation amongst the nations with the isnād like their chains (i.e. this nation); narrator from narrator, the trustworthy from the trustworthy in such a way until it reaches the Prophet (salallahu alayhi wa sallam) and his Companions, so that the sound can be differentiated from the weak, the connected from the disconnected and the fabricated from the genuine.”
View AllClose

MSRP:
Now: £2.99
Was:
Quran Clip – Silver 012 There’s something special about the Quran Clip. If used often enough with the right book, you’re guaranteed to receive the best guidance on earth. Quran Clip is an elegant...
23239

MSRP:
Now: £10.00
Was:
Al-Muneer المنير في احكام التجويد 17A Books that take into account the level of the student and that can provide the recitation and tajweed in a systematic way, which correlates with the issues,...
23243

200 Golden Hadiths From the Messenger of Allah

MSRP:
Now: £4.95
Was:
200 Golden Hadiths From the Messenger of Allah 04CL1 Islam is based on two major sources: the Quran and the Sunnah, and the latter is available to us in the form of hadiths. The Prophet said,...
23257