A Critique Of The Ruling Of al-Taqlid 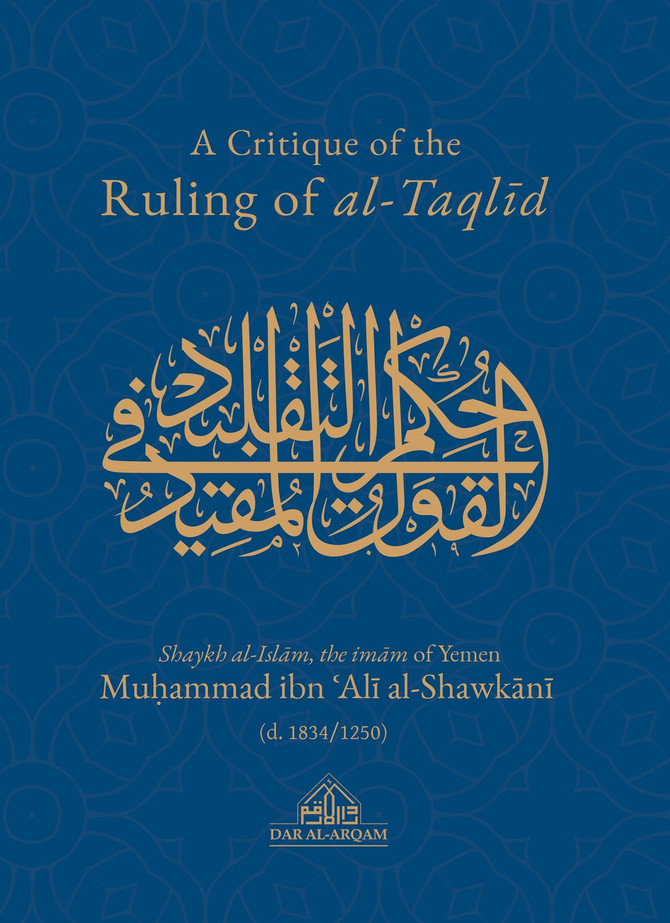 A Critique Of The Ruling Of al-Taqlid

Abu Dāwūd stated that Aḥmad said to him, “Do not make taqlīd of me, nor Mālik, al-Shāfiʿī, al-Awzāʿī or al-Thawrī; rather take from where they took.” [Masāʾil al-Imām Aḥmad (pp.276-277).

Nawāb Ṣiddīq Ḥasan Khan relays, “He was the judge of the congregation, the shaykh of al-Islam, the muhaqqiq, the ʿallāmah, the imām, the sulṭān of the ʿulamā, the imām of the world, the seal of the ḥuffāẓ (i.e. major ḥadīth scholars) without dispute, the proof for debaters, the supreme in isnād and the foremost within the domain of al-ijtihād. […] He did not see one similar to himself, and those who saw him did not see his likeness in knowledge and piety, and in standing for the truth with strength of character and preciseness of tongue. […] He gained proficiency within all the rational and textual sciences. This was to the point that he reached the apex of human understanding, his power of examination was acceded to by both friend and foe, his excellence in the sciences of ijtihād was acknowledged, and [he became] the one to clarify the matters of subtlety within the religion. […] From his works is Nayl al-Awṭār Sharḥ Muntaqā al-Akhbār of Ibn Taymiyyah, in four volumes. The eye of time has not been adorned with its likeness in examination, nor has the entirety of time granted its similitude in attention to the smallest of detail.” [Summarised extracts from his biography in al-Tāj al-Mukallal (443-449)]

The Ruling on Tasweer

MSRP:
Now: €1.78
Was:
The Ruling on Tasweer Tasweer of all kinds (picture, drawings, paintings and sculptures) have become popular among Muslims in recent times. This book offers a brief discussion on this subject...
23385

The Rulings of Ghusl

MSRP:
Now: €3.55
Was:
The Rulings of Ghusl 14B This is a small book on Ghusl in light of the Qur'aan and the authentic Sunnah, put forward to my brother Muslims in every place as an advice for the sake of ALLAAH, and...
22387

MSRP:
Now: €5.92
Was:
Rulings Pertaining to Muslims Women 27B This books goes over many important laws relating to women dealing with aspects of everyday life to special events. "The woman has been given a particular...
21638

The Rulings of Jurisprudence الأحكام الفقهية

The Ruling on Tasweer

MSRP:
Now: €1.78
Was:
The Ruling on Tasweer Tasweer of all kinds (picture, drawings, paintings and sculptures) have become popular among Muslims in recent times. This book offers a brief discussion on this subject...
23385

Rulings Related To The Traveler

MSRP:
Now: €7.11
Was:
Rulings Related To The Traveler SL: 01BL2 It is obligatory upon the Muslim who is upon the airplane when the prayer comes in to pray it to the best of his ability. So if he is able to pray...
22054

Remind Me of My Dua Interactive

MSRP:
Now: €7.11
Was:
Here’s one of the best ways to automate the remembrance of Allah in your home Are you remembering Allah enough? Do you wish you would remember to say your duas for the regular things in your...
24250

MSRP:
Now: €17.71
Was:
The Islamic Ruling Concerning Tasweer 11A Two and Three dimensional Images , Drawings , Paintings,  Photography and Sculptures About book: This is one of the most in-depth English...
21963