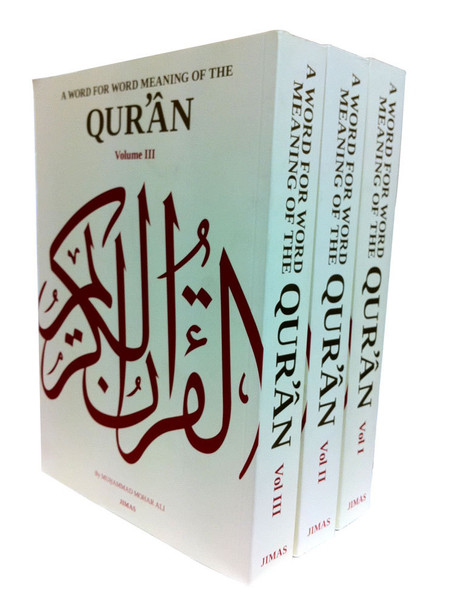 This set places one or a couple of words of the 'ayah in one line of a column and gives their meanings side by side in another column, taking care to see that the flow and intelligibility of the English meanings are not thereby lost. This method enables the reader to identify which English words or phrases represent the meaning of which words in the Arabic text. It has the additional advantage of keeping the meaning strictly to the wording of the text or importing in the meaning any word or expression that has no correspondence with anything in the text. To further facilitate the understanding of the text, the meanings of almost all important words in the text have been given separately. To do this a number has been placed on the English word which represents the meaning of the particular word in the text and then the meanings of that word have been given under that number in another column by the side of the general meaning of the text. The numbering has been kept individual for each page. Also grammatical notes, particularly verb forms and verbal nouns, have been given as far as possible. As the words recur at different pages, so their meanings and grammatical notes also have been repeated, giving cross reference to at least one previous occurrence of the word, indicating the page on which and the number under which the word has been explained before. The aim has been to enable a non-Arab reader to understand the Qur'an as well as to improve his knowledge of Arabic, particularly the Qur'anic Arabic.
View AllClose

MSRP:
Now: £3.50
Was:
The Fourth Caliph of Islam Ali Bin Abi Talib 33B The Golden Series of the Prophet's Companions 'Ali bin Abi Talib was one of the early people who believed in the religion of Islam while still a boy...
22471

MSRP:
Now: £2.95
Was:
Meadows of the Divine SL: 03AL2 ALLAH's speech and mighty revelation is replete with wisdom, truth and justice. Its verses are perfected by one who is perfect; it guides those who lend their ear...
22474