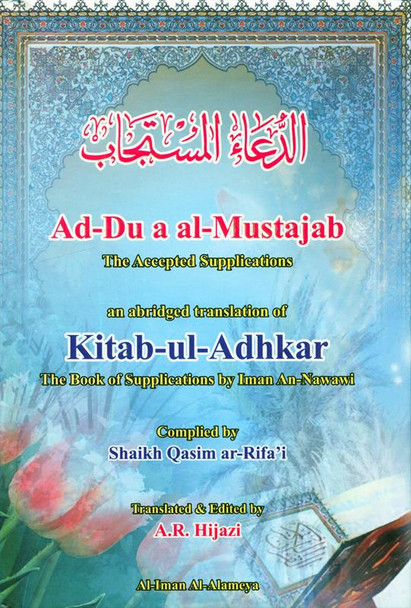 Imam Muhyi ddin Abi Zakareyya Yahya ibn Sharaff al-Nawawi knows simply as Imam Nawawi was Born in the village of Nawa in Southern Syria, Imam Nawawi spent most of his life in Damascus where he lived in a simple manner, devoted to Allah, engaging single-mindedly in worship, study, writing and teaching various Islamic sciences.

Although best known for his works in hadith, Yahya ibn Sharaf al-Nawawi (d. 676/1277) was also the Imam of the later Shafi'i school of Jurisprudence, and widely acknowledged as the intellectual heir to Imam Shafi'i. He was a renowned scholar and jurist who dedicated his life to the pursuit of Islamic learning.

Imam Nawawi died at the young age of 44 years, leaving behind him numerous works of great efforts and knowledge.

MSRP:
Now: £4.99
Was:
Ad Dua ul Mustajab ( The Accepted Supplications) 14B This is the book of different supplication for different occacion
22632

MSRP:
Now: £9.00
Was:
Ulum Al-Quran SL: 03CL2 The Qur'an contains the revelations of Allah, the Creator and Sustainer of the Universe, to mankind. It is the message from God to man and therefore of utmost importance...
21384