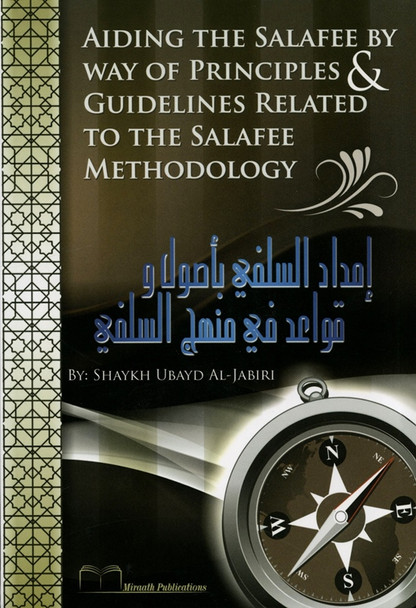 SL: 15B
Aiding the Salafee by Way of Principles & Guidelines Related to the Salafee Methodology by Shaykh Ubayd Al-Jabiri As-Salafiyyah in the Arabic Language Means: Ascription to he who has preceeded; meaning passed by. In its legislative usage, it is: All those who have passed after the Prophet Peace be upon him (following) his tracks; from the companions, the Imaams amongst the Taabi’oon (successors of the companions), and those after them. Know, may Allaah bless you, that no one from the human beings in any time or place founded Salafiyyah. So Shaykh Muhammad ibn ‘Abdul-Wahhaab along with his brother Imaam Muhammad ibn Sa’ood were not the founders of Salafiyyah. Nor was anyone before them from the people of knowledge and the Imaams of the religion and the true callers to this monotheistic religion its founder; such as Shaykhul-Islaam Ibn Taymiyah and his students, and those who were before him; such as the four Imaams and those who we have named from the Imaams; nor from the Taabi’oon, nor from the companions of Muhammad ﷺ nor was Muhammad ﷺ. Nor was it anyone who came before him from the Prophets and Messengers, upon all of them be prayers and peace. Rather, it is from Allaah. The Prophets and Messengers brought it. They conveyed that which He wished from the worship legislatively; as did those who came after them from their companions and followers. So whoever came after them were callers to Allaah in conformity with this Salafiyyah.
View AllClose

Noor Kids: Sunshine After The Rain

MSRP:
Now: £4.95
Was:
Sunshine after the rain.In this book, we hope to convey two key lessons related to patience.
21497

The Methodology of The Saved Sect

MSRP:
Now: £7.95
Was:
The Methodology of The Saved Sect 09B The subject matter of this book calls the Muslims to the Belief (aqeedah) of Tawheed, pure and completely free of Shirk, the manifestations of which have...
22408

MSRP:
Now: £5.95
Was:
Essential Questions & Answers on the Salafee Methodology By : The Nobal Scholar Dr. Saalih Ibn Fowzaan al-Fowzaan 11B In this time of political turmoil and social upheavals, many sects claim...
22579

A Guide To The Principles Of Tajwid

MSRP:
Now: £2.50
Was:
A Guide To The Principles Of Tajwid 16B Tajwid literally means ' to imrove or do better' and is the knowledge and application of the rules of recitation practised by the Prophet(s.a.w.w)as Jibril(a...
21385

MSRP:
Now: £6.95
Was:
Remembrance and Prayer(The Way of Prophet Muhammad) 13A An in-depth description how the Prophet Muhammad used to remember Allah and pray to Him. The intimate relationship with Allah which was the...
23147

MSRP:
Now: £5.45
Was:
Rules of Tajwīd, is a sequel to the Safar Qāʿidah and part of the comprehensive Safar Learn to Read Series. This book consists of seven progressive levels, each targeting a unique feature of...
24797