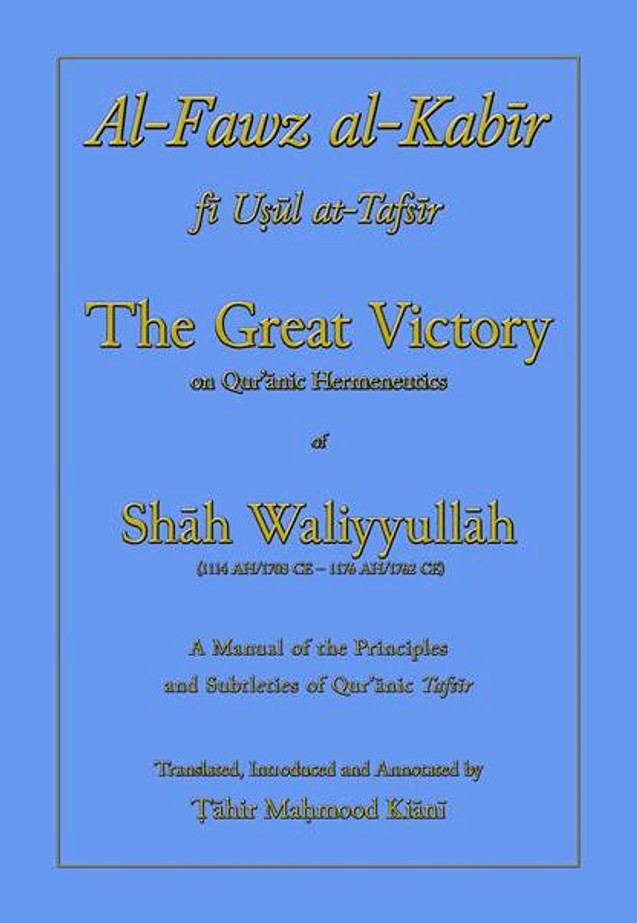 20B
Al-Fawz al-Kabīr fī Uṣūl at-Tafsīr – “The Great Victory, on Qur'ānic Hermeneutics; is a manual of the principles and subtleties of Qur'ānic tafsīr. In it the author outlines the five fundamental sciences that the Qur'ān contains: the science of judgements (aḥkām), reminding others of the Favours of Allah, the Days of Allah and the Life after Death, and giving particular attention to the science of polemics. He also reviews the other sciences of tafsīr such as the circumstances of revelation (asbāb an-nuzūl), abrogating and abrogated āyāt (an-nāsikh wal-mansūkh) and the unusual words and phrases of the Qur'ān (gharāib al-Qur'ān), before concluding the book by looking at the extraordinary and miraculous aspects of the Noble Book, and a final chapter on the meanings of the letters of the Arabic alphabet. Shāh Waliyyullāh was born on 4th Shawwāl 1114 AH/10th February 1703 CE in northern India. He was descended from ‘Umar ibn al - Khaṭṭāb and was thus Qurayshī. He had a traditional education in all the classical sciences from his father and other scholars in India before journeying to Makkah from where he returned in 1145 AH/1733 CE with great knowledge of all the major works of ḥadīth. He dedicated the rest of his life to teaching in the Madrasah Raḥīmiyyah and to writing widely on all the known Islamic sciences as well as working indefatigably for the reform of Indian society and the renewal of the dīn. He died in 1176 AH/1762 CE
View AllClose

MSRP:
Now: £10.00
Was:
Heroes of Islam 25A All praise and thanks are due to Allah for helping me in preparing this book. In the process of writing the various parts of this book, many brothers contributed with their...
21682

The Book of Heart Softeners By Salih Al-Uthaymeen

MSRP:
Now: £4.50
Was:
The Book of Heart Softeners By Salih Al-Uthaymeen SL: 01AL2 In the name of Allah, the Most Merciful and Most Compassionate. Praise to the One Who completed this religion and sent guidance through...
21899

Gateway To Arabic : Extension Book One

MSRP:
Now: £12.00
Was:
The Story of Prophet Yunus & The Whale( DVD)   An exciting and unique story about Prophet Yunus (as), who is swallowed by a whale and endures many hardships while conveying the message of...
22283

MSRP:
Now: £9.95
Was:
Al Fawz Al Kabir Fi Usul At Tafsir The Great Victory SL: 20B Al-Fawz al-Kabīr fī Uṣūl at-Tafsīr – “The Great Victory, on Qur’ānic Hermeneutics” is a manual of the principles and subtleties of...
21725

MSRP:
Now: £14.95
Was:
Kitab At-Tabaqat Al-Kabir Volume VI: The Scholars of Kufa 20B The Kitab at-Tabaqat al-Kabir by Abu 'Abdullah Muhammad ibn Sa'd is one of the most important and earliest surviving collections of...
22140