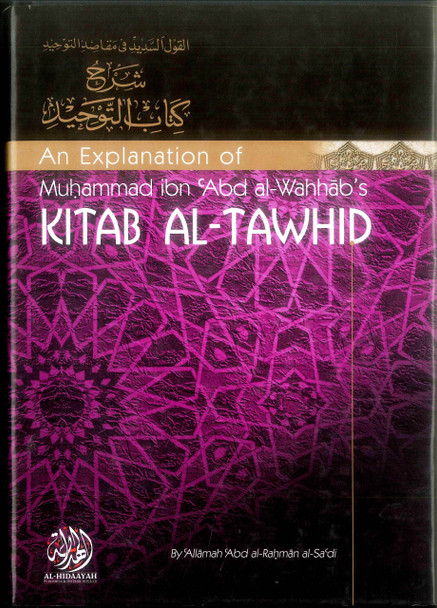 This book is a brief yet extremely beneficial explanation of Sheikh al-Islam Muhammad ibn Abd al-Wahhab?s famous Kitab al-Tawhid. The book, as the title suggests, deals with the subject of worshipping Allah alone without associating partners with Him. The author highlights many matters that have become common among Muslims even though they are clearly acts of shirk or associating partners with Allah. Not only is this book distinguished due to the importance of the subject matter but also due to the methodology adopted by the author for which he is well known. The reader will find that the majority of the book consists of verses of the Qur?an, ahadith of the Prophet (s) and sayings of the early Muslims. The explanation presented at the end of each chapter of Kitab al-Tawhid is that of the renowned scholar Allamah Abd al-Rahman al-Sa di, counted among the major scholars of recent times. He was born in al-Qasim, Saudi Arabia, in the year 1307AH, and from a young age became engrossed in the attainment of knowledge. His dedication and thirst for knowledge led him to become an authority in many of the Islamic sciences as is evident from the books that he authored. He passed away in the year 1376 AH, may Allah have mercy on him.
View AllClose

MSRP:
Now: £5.95
Was:
Kitab At Tawhid. Livre du Tawhid (Monotheisme)(French) SL: 00000 Kitab At-Tawhid is one of the best books on the subject of Tauhid Monotheism) and ranks high in authenticity. In this book all the...
22302

MSRP:
Now: £8.00
Was:
Kitab At-Tawhid Hard Cover 24B In this book, all the relevant verses have been discussed reasonably, rationally, and sincerely; and the essence of the Qur'an and Sunnah is placed in a very simple...
22075

MSRP:
Now: £5.00
Was:
Tawhid Of Allah's Most Beautiful Names & Lofty Attributes 10A Among the subjects that have not been adequately covered in the English language, perhaps the most important of them is the one...
21220