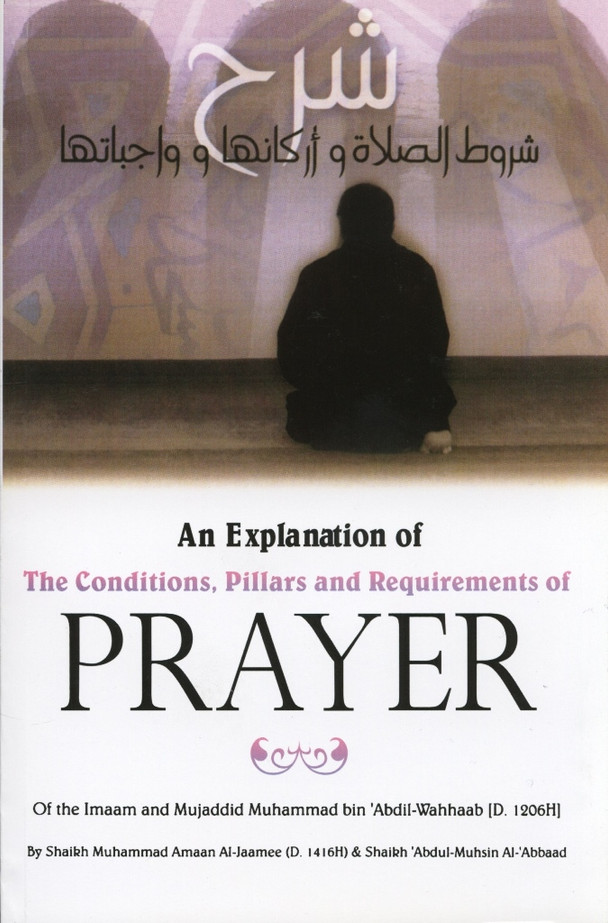 SL: 00000
Before you is an explanation of one of the classical works on prayer and ablution written by the Imaam and Mujaddid of the 13th century, Muhammad bin Abdil-Wahhaab, may Allaah have mercy on him. This book: "The Conditions, Pillars and Requirements of Prayer" is a brief treatise designed for easy memorization and retaining since the author lists each point briefly followed by its proof from the Qur'an and Sunnah. The study and careful review of this classical work will give the reader a concise and general understanding of the basic fundamentals and legal rulings of ablution and prayer and produce students with firm knowledge of the core and subsidiary issues of prayer, which is the first thing we will be asked about on the Day of Judgement. It is for this reason that this classical work continues to be taught today all over the world. From among the several scholars that explained this treatise are Shaikhs Muhammad Amaan Al-Jaamee and ‘Abdul-Mushin Al-‘Abbaad. In an effort to bring as much benefit as possible to the English readers, both of these explanations have been translated and included in this book. About the Authors: Shaikh Muhammad Amaan Al-Jaamee [1416H] and Shaikh Abdul-Muhsin Al-Abbaad are two of the well-known scholars of this century, based in Saudi Arabia, who are known for their sound knowledge, upright creed and firm methodology. Extensive biographies for each author can be found within this publication.
View AllClose

MSRP:
Now: £2.00
Was:
The Prayer & Purification 04CL1 In this treatise the correct procedures of prayer (Salaah) are clarified for the new Muslim. The main objective of this work is to explain the steps of...
23210

5 Pillar Board Game : Conquer the Pillar of Islam

MSRP:
Now: £14.95
Was:
5 Pillar Board Game : Conquer the Pillar of Islam 21C - Increase your knowledge of the pillars of Islam while having loads of fun with your family and friends. - Strategies and rotate your Pillar...
22239

MSRP:
Now: £4.90
Was:
The Five Pillars Of Islam As Mentioned In The Quran & Authentic Sunnah 11B In the name of Allah the Most Gracious the Most Merciful All praise & thanks are due to Allah, we seek His help...
22321

MSRP:
Now: £5.50
Was:
The Pillars of Islam 05DL3 The 5 main pillars of Islam and many sub-pillars of those have been explained in detail. This book starts of with the basic two testimonies explaining the meaning and...
22978

The Pillars Of Islam and Iman

MSRP:
Now: £8.00
Was:
The Pillars Of Islam and Iman 05DL1 Besides being a great scholar, Sheikh Muhammad bin Jamil Zino is also the author and compiler of many books directly related to the fundamentals of Islam. He...
22806

MSRP:
Now: £5.95
Was:
Pillars of Islam. Piliers De Lislam (French) SL: 00000 The book discussed thoroughly the five pillars of islam according to the Qur'an and Sunnah. It has also covered other important topics like...
22303