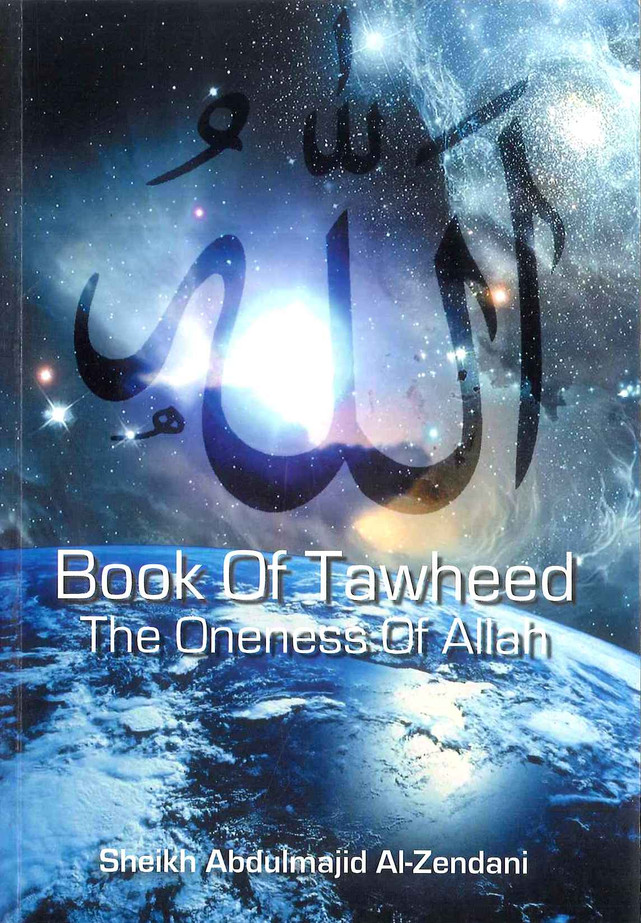 Book Of Tawheed ( The Oneness Of Allah )

Every part of man's body testifies that Allah has created him for a purpose. The human constitution, which does not change as a result of time or place, testifies that there is a single purpose behind man's creation. The purpose of man's creation is related to this life and the Hereafter, but is not apparent to he who confines his view exclusively to the dimension of this worldly life. This Book attempts to link the religious facts which the Qur'an has long and extensively talked about, with the scientific evidence established in the universe. This Link is explicitly expressed by Allah in the Qur'an Sheikh Abdul Majeed al-Zindani (Other spellings: Abdel majid al-Zendani, Abdul Majeed Zendani, Abd Al Majid Zandani) has been described as 'a charismatic Yemeni academic and politician.' He is the founder and head of the Iman University in Yemen, head of al-Islah political movement in Yemen, and the founder of the Commission on Scientific Signs in the Quran and Sunnah, based in Saudi Arabia. In July 2008, Abdul-Majid al-Zindani joined a panel of Islamic clerics and prominent tribal chiefs to announce the creation of a new morality authority. The Meeting for Protecting Virtue and Fighting Vice declared its intention to alert Yemen's police force to infringements of Islamic law. The declaration followed reports of vigilante activity by self-appointed 'morality guardians' in Hodeidah, Aden and Sana'a.
View AllClose

MSRP: £3.50
Now: £3.00
Was:
Islamic Teachings Course Vol-2 100s of difficult questions about Islamic answered in an easily understood and structured manner. Based on the cassette series produced in Canada by Dr Jamal A Badawi...
21157

MSRP:
Now: £8.00
Was:
Title Here 11A The Muslim Da'ee (caller), who is holding onto the prophetic methodology and is following the way of the believers in accordance with the understanding of the companions and those...
21449

MSRP:
Now: £1.50
Was:
Hajj & Tawheed SL: 03DL2 Hajj is to set out for Makkah to worship ALLAH by performing certain religious rights in accordance with the Prophets صلی الله علیه وآلیه وسلم sunnah. It is a time in...
22204

MSRP:
Now: £2.50
Was:
My Tawheed Book 28B A colourful and easy to understand book which teaches children the basic understanding of Tawheed.
21755