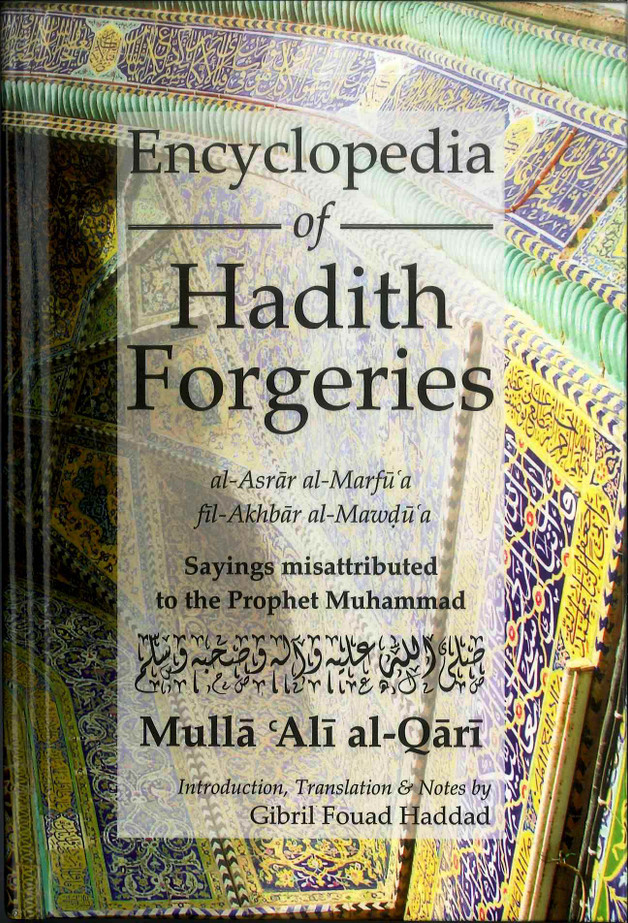 SL: 03AL2
The first comprehensive catalogue and study of hadith forgeries in English. Beacon Books is proud to commence our publishing programme with the launch of The Encyclopedia of Hadith Forgeries by Mullah Ali al Qari translated by Dr Gibril Fouad Haddad.This 740 page hard back book has been over 10 years in the making and is the first comprehensive catalogue and study of hadith forgeries in the English language. The Lifting of Secrets Concerning Forged Re­ports was written over four hundred years ago by a respected and prolific Meccan savant of Afghan origin. Mulla ‛Ali al-Qari (d. 1014/1605) was thor­oughly famil­iar with the large body of critical lit­erature on hadith forgery, which he re­fined and re­or­dered alpha­beti­cally into 625 entries. Al-Qari’s last work, it is the only catalogue of for­geries with both a transmission-based and content-based critique, illustrating the author’s vast erudition as well as his lenient choices in hadith metho­dology and his classic Hanafi and Sufi views. The translator has added his own study of the forgery and ‘famous hadith’ genres, the life and works of the author, extensive footnotes and exhaustive indices. A total of 3,000 reports are docu­mented in this volume covering doctrinal and juridi­cal forgeries, Shia for­geries, Sufi for­geries, racial forgeries, misogynistic for­geries, food forgeries, ‘Israelite’ forgeries, medical forgeries, sex forgeries, spurious books, spurious grave-spots and more. This is the first and long overdue au­thentic refer­ence work on hadith forgeries in English. Dr. Gibril Fouad Haddad holds scholarly licenses (ijāza) from 150 shaykhs and has authored dozens of books and hundreds of articles in Islamic hermeneutics, doctrine, hadith, biography and here­siology. He was hailed in the inaugural edition of The 500 Most Influential Muslims in the World as one of the clearest voices of traditional Islam in the West. His recent works include The Four Imams and Their Schools, Sunna Notes III: The Binding Proof of the Sunna (with Ibn Hajar’s 50-page com­mentary on the hadith of islām, īmān, ih.sān) and The Muhammadan Light in the Qur’an, Sunna and Companion-Reports. He lives in Brunei Darussalam.
View AllClose

A Concise Children's Encyclopedia of Islam

MSRP:
Now: £20.00
Was:
A Concise Children's Encyclopedia of Islam The present reference tool, which is a humble attempt to place before the English-speaking Muslim children a number of basic Islamic teachings and...
23556

MSRP:
Now: £40.00
Was:
Scientific Interactive Encyclopedia • Raising the new generation’s level and enriching their culture in interesting ways. • Discovering a lot of amazing facts in an interesting way. •...
23691

The Scientific Encyclopedia For Students

MSRP:
Now: £40.00
Was:
The Scientific Encyclopedia For Students • Raising the new generation’s level and enriching their culture in interesting ways. • Reading what is useful and interesting at students’ leisure. •...
23692

MSRP:
Now: £4.95
Was:
Forty Hadith Qudsi SL: 013 Hadith Qudsi (Sacred hadith) are those sayings of the Prophet Muhammad صلی الله علیهِ وآلهِ وسلم divinely communicated to him, though the actual wording need not...
21572

The Necessity of the Hadith In Islam

MSRP:
Now: £9.95
Was:
The Necessity of the Hadith In Islam SL: 03C There was a time when the notion of Hadith rejection was inconceivable. Sad to say, it is now becoming a widespread phenomenon in many countries. The...
22244

MSRP:
Now: £6.00
Was:
An Nawawi’s 40 Hadith Imam Nawawi had a very short life of 44 years, but even during this short period, he wrote a large number of books on various subjects. Nearly every work is a masterpiece...
23776