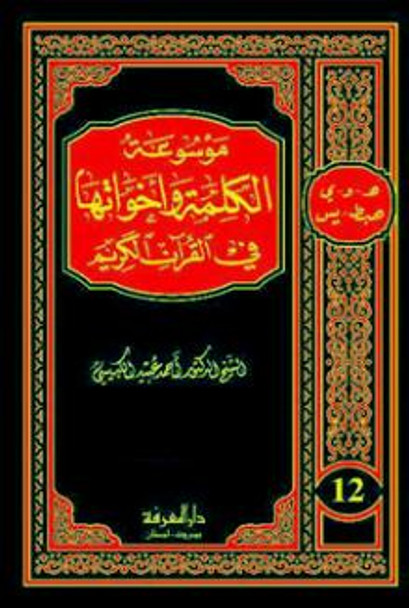 Encyclopedia of the word and sisters in the Quran 12 Volumes Encyclopedia of Quranic language, word and sisters. The Qur'anic word and its language have a special philosophy closely linked to its miraculousness. Our work in the Encyclopedia: We mentioned the word in the Koranic verses and made it a requirement for research, and with it (sisters): synonyms meaning - and explained its meanings. The Holy Quran deals with the most synonymous words, meaning the meaning, and completed the imaging and diagnosis of the image and beauty and the rhythm and weight for their peers. Bina in explaining the meanings of the accuracy of the Koranic expression of the word without her sisters and that marketed in the appropriate location so that gives the meaning of what it receives from the shades of meaning meant to perfection and complement it with its implications, even replaced with what was reported meaning. We have developed linguistic texts: linguistic explanations of the word drawn from the mothers of lexicons and dictionaries and linguistic sources. We have mentioned the common meaning of the word in the Holy Quran, and the accuracy of its use with the mentioned verses. We have listed most of the verses in which the word was mentioned in the Quran with its interpretation of the mothers of the books of interpretation and the statement of their sources. And remains the word and coordinate the importance of the origin of the accuracy of the Quranic expression in the description and selection, and has its own philosophy in each place without others
View AllClose

MSRP:
Now: £6.50
Was:
Mohammad's Prophethood Reality or Myth (Hard Cover) 03A No other personality in history has generated more debate than that of the Prophet of Islam Muhammad! He has been ranked the number one most...
23735

MSRP:
Now: £6.00
Was:
The Fitnah Of The Dajjal And Gog And Magog Imam as-Sa'di said: The fact that the time in which he will come is unknown indicates that no believer can guarantee safety for himsel from...
23805

MSRP:
Now: £20.00
Was:
Explanation of the Concise Advices of Shaykh-ul-Islam Ibn Taymiyyah Abul-Qāsim as-Sabtī—the scholar and world explorer—regarded a then 36-year-old Ibn Taymiyyah to be the most knowledgeable...
23807

MSRP:
Now: £5.00
Was:
Qaida Baghdadi Al Arabiyah Qaida Baghdadi The book uses a gradual system in teaching the alphabet and reading from using the letters, to forming the word, to forming an Arabic sentence
23901