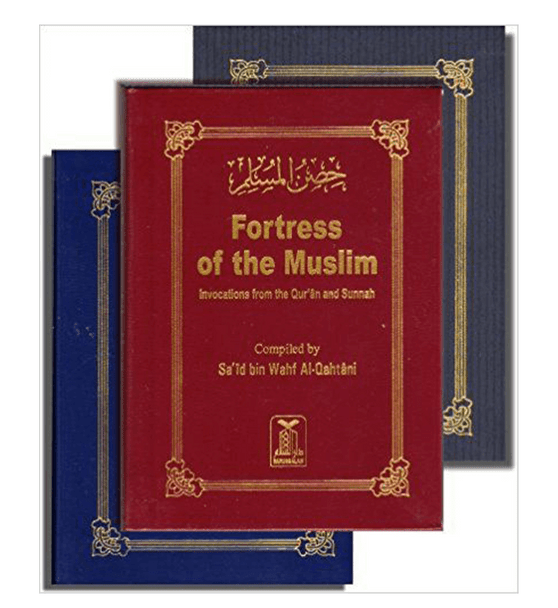 SL: 00000
Invocations from the Qur'an & Sunnah. Translation of Hisnul-Muslim. (aka 'Citadel of the Believer') This is a very beautiful booklet consists of many authentic Dua's (supplications) for a Muslim to supplicate on a daily basis and on special occasions. Author's Note: This book is an abridgement of my earlier work entitled, Adh-Dhikr wad-Du'a wal-'llaj bir-Ruqyah mina'-Kitab was-Sunnah. In order to make it small and easily portable, I have chosen only the section on words of remembrance for this abridgement. To achieve this, I only mentioned the text of the words of remembrance instead of the entire Hadith. I also limited myself to mentioning only one or two references from the original book for each Hadith. Whoever would like to know about the Companion who related a particular Hadith, or more information about where it is recorded, should refer to the original work (mentioned above). I ask Allah the Glorious, the Mighty, by His beautiful Names and by His sublime Attributes to accept this as having been done sincerely for His sake alone. I ask Him to bring me its benefits during my lifetime and after my death. May those who read it, those who print it, or have had any role in distributing it, benefit from it also. Surely He, glory be unto Him, is Capable of all things. May the peace and blessings of Allah be upon our Prophet, Muhammad, and upon his family and Companions and whoever follows them in piety until the Day of Judgement. Said bin Ali bin Wahaf Al-Qahtani
View AllClose

MSRP:
Now: £12.00
Was:
Selected Friday Sermons 24A This book is a must for every Imam and anyone who expects to give Friday sermons in the English speaking world. The sermons contained in this book are collected from the...
22818

MSRP:
Now: £1.75
Was:
Mallow Twists by SweetZone SL-01A Whether it’s the soft texture, the delicious flavours, the quality packaging, or a mixture of all these things, these go down a treat all year round. All of our...
23085

Fortress of the Muslim (Pocket Size)

Fortress Of The Muslim (Du'a From The Qur'an & Sunnah)

MSRP:
Now: £2.95
Was:
Fortress Of The Muslim (Du'a From The Qur'an & Sunnah) Making Dua to Allah frequently and with full submission has many benefit - it increases imaan, gives hope and relief to the distressed, and...
23959

MSRP:
Now: £8.00
Was:
Bengali Translation of Ar Rahiqul Makhtum - The Sealed Nectar. One of the most popular and authentic biographies of the Prophet Muhammad (SAW), translated into Bengali. The original...
23645

MSRP:
Now: £19.95
Was:
The Clear Quran - With Arabic Text (Flexi Cover) 00000 English Translation with Arabic Text For a translation to do justice to the Quran and capture its elegance and vigor, it has to be accurate,...
24060

MSRP:
Now: £11.00
Was:
Collection of Authentic Invocations (Pocket size) Selection of Supplications from the Quran & Sunnah of Prophet (SAW) collected by the Muhaddith of our Era Shaykh Muhammad Nasiruddin al-Albani...
23622