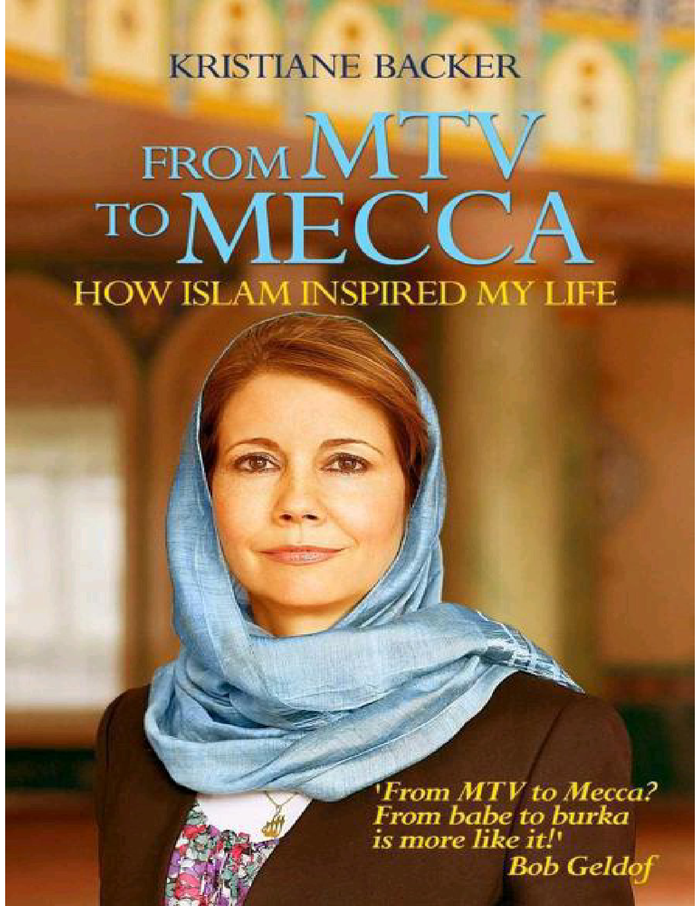 06B
This book recalls the journey of a woman, Kristiane Backer, who encountered Islam when she was a presenter with MTV. Hers was a world that had no association with religion, was disconnected from Christianity and Islam, far from any kind of spirituality. A world of entertainment, music and pop videos, acting as distraction in our lives, sometimes making us forget the true meaning of life. Whilst Kristiane was working at MTV she began a personal quest, which she describes in her book: howduring her travels across the globe, she came across different people who believed in God, and it is these conversations and experiences that her own spiritual journey towards God graduallybegan to unfold.Throughout the book three important dimensions become apparent in the development ofKristiane’s personal relationship with God. The first is when she moves her focus away from theentertainment industry, where it is easy to forget about one’s self, and instead she begins to considerthe true meaning of what it is to be a human being. Kristiane knew of physical and emotional love,however, when she discovered the very essence of spirituality, she found a higher love, somethingbeyond human love – the love of the Creator. Consequently she recognises the second dimension, thequest for and the real essence of life – not only what it means to be a human being, but how each of usmust deal with our own life, heart and mind. Kristiane began this journey asking questions, and alongthe way found new answers about how she might live a more fulfilled, contented and giving life. Andfinally the third dimension, whereby in returning to God, to the meaning, content and substance of life,and acknowledging the ethical teachings of our faith, one can experience a whole new beginning, startlife again, with new love, new responsibility and new objective
View AllClose

MSRP:
Now: £4.95
Was:
In this book, we focus on two important habits, getting enough quality sleep and exercising. Sleep is important for our health and wellbeing because it gives us the ability to rest and reset,...
21461

MSRP:
Now: £5.00
Was:
Tajweed Quran in Zipped Cover (8x12cm) 21C The idea behind the Colour Coded Tajweed Holy Quran: Based on a practical understanding of phonology, we have colour-coded the place of some letters to...
21513

MSRP:
Now: £20.00
Was:
GREY SLEEVED SLIP  A perfect long sleeved necessity to wear beneath your abaya and kimonos to give you a more streamlined look as well as reduce any bulk. The silk textured fabric compliments...
22603

MSRP: £40.00
Now: £35.95
Was: £40.00
BLACK EMBOSSED KIMONO   A style in which the silky fabric perfectly complements the embellishment design on the back bodice and arms. A draw cord detail on the waistline attached to...
22802

The Political Shariyah on Reforming the ruler and the Ruled

The Value of Time

MSRP:
Now: £7.00
Was:
The Value of Time (Shaykh Abd al-Fattah Abu Ghuddah) 06B The Value of Time is a collection of amazing sayings, anecdotes and wonderful stories of the scholars of the Muslim Ummah, which indicate...
23124

MSRP:
Now: £13.50
Was:
Purity of Faith 19B A new translation and commentary of Kitab at-Tawhid The order to live one’s life in accordance to the dictates of Tawhid, monotheism, is the single most important...
23109

MSRP:
Now: £9.50
Was:
101 Seerah Stories and Dua 0000 It is a richly illustrated collection of 101 great stories told in simple language that children will easily understand and relate to. Each story comes with...
23230