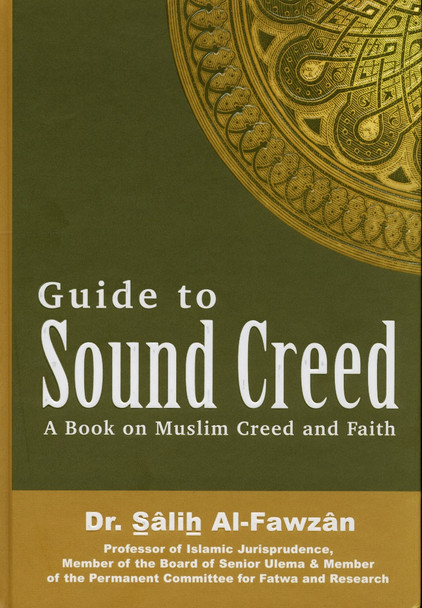 09A
Clarifying the sound Muslim Creed and calling people to believe in it, is the most crucial issue because it is the foundation on which one's deeds are judged whether denied or accepted. This book gives clear explanation of the Muslim sound creed as pointed out in the Quran and Sunnah. In this book, Dr. Salih al Fawzan has shed light on doctrinal issues of utmost importance in a genuine and reader-friendly style. Guide to Sound Creed, in its translated version, fulfills a long introductory book focusing on the English-speaking Muslims for a brief, introductory book focusing on the sound Muslim creed. It is a valuable book for novice readers, be they Muslims or non-Muslims. The chapters of the book focus on major issues in Tawhid (monotheism) such as the necessity of learning and teaching the Muslim creed, the principles of Muslim creed; namely belief in Allah, the Angels, the Heavenly Books, Allah’s Messengers, the Day of Judgment, and the Divine Decree and Predestination as well as many other issues. Dr. Salih al Fawzan (born in 1935) has obtained a PhD in Islamic jurisprudence and has a high profile in teaching jurisprudence. He is a member of many academic institutions including the Board of Senior Ulema, the Permanent Committee for Fatwa and Research. He has written more than sixty published works covering Muslim Creed, Islamic jurisprudence and Muslim’s conduct.
View AllClose

MSRP:
Now: £8.50
Was:
Al-Mahdi Truth OR Fiction? 16B A detailed treatise on one of the signs of the hour, the arrival of al-Mahdi, a rightly guided leader for the Muslims. A matter of controversy and part of the creed...
21909

MSRP:
Now: £22.95
Was:
The Authentic Musnad Of Reasons For The Descending Of Revelation 11B "Knowing the reason why the verse was revealed helps us to understand its meaning. Some of the verses were difficult for some...
21962

MSRP:
Now: £3.95
Was:
Purify my Heart 15B Purify my Heart By Talib Ibn Tyson al-Birtani Complied from the works of IMAM IBN-TAYMIYYAH IMAM IBN AL0QAYYIM SHAYKH ABUL ISLAM This book contains a compilation of three...
21982

MSRP:
Now: £15.99
Was:
This is a commentary of the classic treatise Lumatul I’tiqaad (The Illuminating Creed) of the great Imam, Abu Muhammad Muwaffaq-ud-Deen Ibn Qudamah AI Maqdisi, may Allah have mercy on him. In...
24803