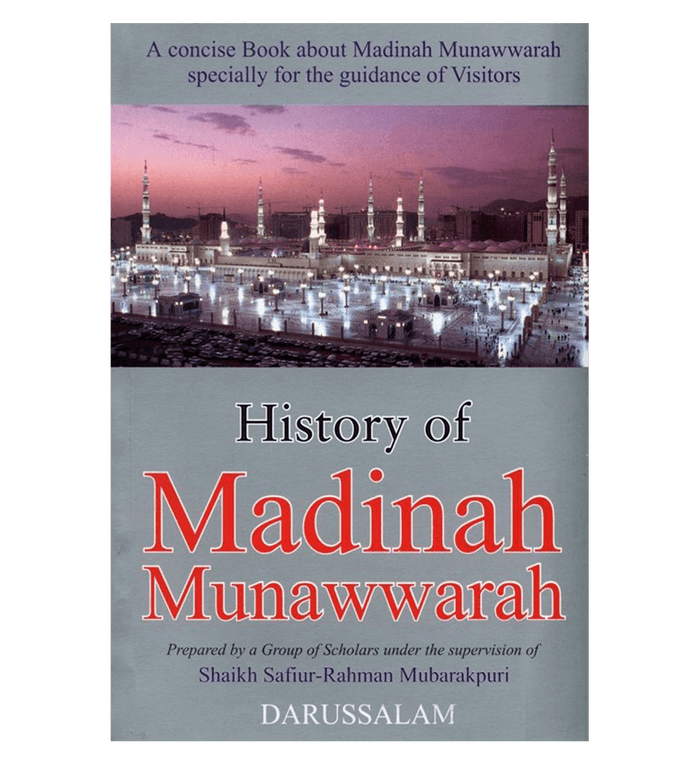 28A
In this book, mention has been made about the different aspects of Al-Madinah, and the most important historical events are recorded that have direct effect on the establishment and sacredness of Al-Madinah as well as its religious weight.This book has highlighted the sites that are highly important whenever Al-Madinah is mentioned like the Prophet’s Mosque, Quba Mosque and others. A great part of the book is designated to speak about the Prophet’s Mosque updating the expansions and the improvements that has taken place from the time of Muhammad (Sallallaahu alaihi wa sallam) till the Saudi era. It contains more than fifty, pictures taken from original documented resources. The pictures vary from old to new dealing with many aspects. The book is a genuine addition to the Islamic library in, its subject both for the researcher and the regular reader. This book sought scientific trustworthiness, by presenting only the correct Ahadith and authentic reports..
View AllClose

MSRP:
Now: £3.00
Was:
The Story of Muhammad صلی الله علیه آله وسلم in Madinah 28B A new amazing serious of children's illustrated books, the book is easy to read and follow with pictures for little children to enjoy...
21769

MSRP:
Now: £3.00
Was:
The Story of Muhammad صلی الله علیه آله وسلم in Makkah 28B A new amazing serious of children's illustrated books, the book is easy to read and follow with pictures for little children to enjoy...
21770

MSRP:
Now: £1.00
Was:
Pesches (Seftali) by Haribo SL-01A No artificial colours. Suitable for consumers with Halal dietary requirements. This product is gluten free and lactose free.
23097

MSRP:
Now: £10.00
Was:
Holy Makkah (Brief History Geography & Hajj Guide 04CL1 This book mentions the different aspects of Makkah, and recorded the most important historical events that have direct effect on the...
22858

MSRP:
Now: £3.99
Was:
Madinah Arabic Reader Book 7 8A Professor Abdur Rahim, Director of the Translation Centre of the King Fahd Quran Printing Complex and former Professor of Arabic at the Islamic University of...
23260

MSRP:
Now: £12.00
Was:
Tajweed Quran Arabic Only 135 (Persian/Urdu script) 15 Lines 21B A Colour Coded Quran with Colour Coded Manzils in an Arabic script that is easy to read for the non-Arabic speaking person as well...
23271