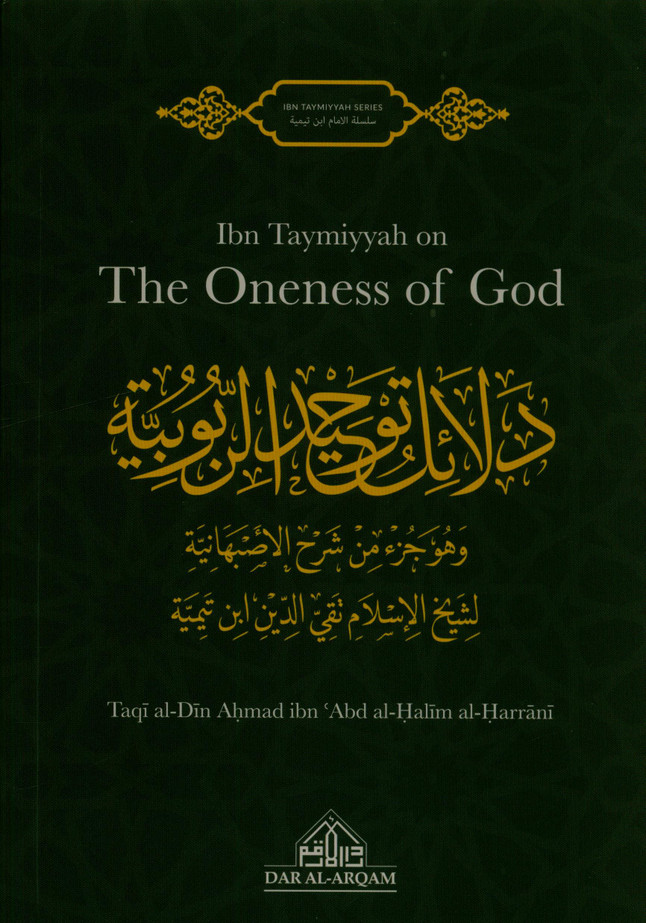 From the translator's preface:
This book is the first in an envisioned series of translations from 1bn
Taymiyyah's theological works that cover a wide range of topics from the
evidences of God's perfection to the signs of Prophethood, and from the
meaning of God's creative agency to the compatibility of divine predestination
with human moral agency. The series aims to provide readers from the
English-speaking world access to Ibn Taymiyyah's articulations of these
important matters of the Faith in an effort to demonstrate the superior
rationality embodied in Islamic Faith over the conflicting claims of rationality
offered by other religions, philosophies and theological positions.
It is my estimation that such an English series is much needed nowadays,
especially in response to current challenges posed by growing trends of
atheism.Ibn Taymiyyah's exceptional insight and distinguished explanations
of Qura'nic arguments have helped many Muslims remain intellectually
satisfied in the face of doubts and challenges presented by competing world
views.[...]
In Sharh al-Asfahāniyyah,Ibn Taymiyyah criticizes the theology of al-Asfahāni
and other Kalam theologians and disagrees with many of their key arguments
by which they sought to demonstrate the main tenets of Islamic creed. He
dedicates an entire chapter to pointing out errors in the Argument from
Composition, an argument adopted from Avicennian philosophy to prove the
Oneness of God. Ibn Taymiyyah goes on to provide alternative rational
arguments for God's Oneness from the Qur'ān, giving a lengthy explanation of
two specific arguments from chapter al-Mu'minūn.

MSRP:
Now: £10.00
Was:
Book Of Tawheed ( The Oneness Of Allah ) 16B Every part of man's body testifies that Allah has created him for a purpose. The human constitution, which does not change as a result of time or place,...
21282

The Book Of Tawheed (Oneness of Allah) DIP

MSRP:
Now: £8.00
Was:
The Book Of Tawheed (Oneness of Allah) 24A Allah, the Exalted, has brought the Creation into existence for the purpose of worshiping Him. Proper worship depends mainly on the soundness of the...
22807

MSRP:
Now: £21.99
Was:
Master Tawheed In 24 hours (oneness of Allah) 11B The first question that we will be asked in our grave will be about our Lord. This in itself is sufficient to show you the importance of this book...
23170

The Modernist Menace to Islam

Large size Fortress of the Muslim Du'a from the Qur'an & Sunnah

MSRP:
Now: £4.50
Was:
Making Du'a to Allah frequently and with full submission has many benefits - it increases imaan, gives hope and relief to the distressed, and saves the supplicant from despair and isolation. In the...
24902

MSRP:
Now: £6.00
Was:
In an all-encompassing manner,Rituals of a Worshiping Heart,describes the heart, it's been responsible for perception andcognitive response, its virtues and importance,and follows withdiscussions...
24899

Release from the Shackles of Desires

MSRP:
Now: £2.50
Was:
Release From The Shackles of DesiresIbn QayyimMankind is granted innate desires as a means of trial and sound intellect to help guide and regulate his desires. Allah also provided man divine guidance...
24894