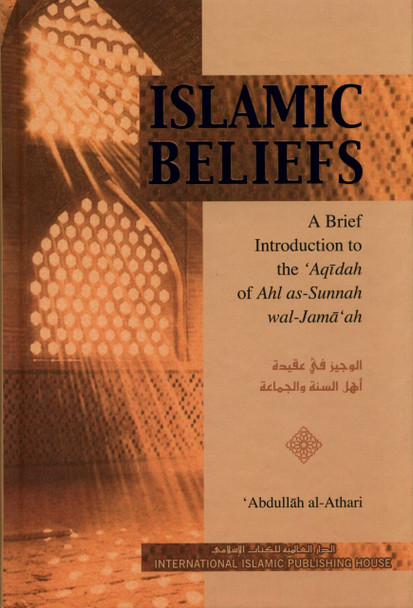 At this time of confusion, heresy and division, it is essential for the Muslim to check on his belief and his approach to Islam, so that he may be certain that he is following the path of the Prophet (B.P.U.H) and the early generation of Muslims (the salaf). Without this checking, a Muslim may live his whole life, following a deviant, heretic path, thinking that he is doing the right thing, only to find out - when it is too late - that his path only leads to Hell.

Many books have been written by the scholars explaining, in great detail, the path of the Prophet (B.P.U.H) and the path of the early generation of Islam. Many of these books are lengthy and written in a complex and difficult style that is only understood by those who have a great deal of knowledge about the deviant sects and their ideas, which outs them beyond the reach of most ordinary readers.

In contrast, this book Islamic Beliefs - A Brief introduction to the Aqeedah (belief, creed) of the Righteous Salaf, is written in a straightforward style, distilling the knowledge of the scholars and making it accessible to the ordinary Muslim. It touches on the main points of 'aqeedah and explains the main features of the path of the Prophet (P.B.U.H) and the early generation, with brief references to the deviant groups in order to show the contrast between the path of the Prophets (P.B.U.H) and the paths of the deviant groups, between light and darkness, guidance and misguidance. The straightforward approach of this book will allow the reader to follow its arguments and develop a clear picture of the proper approach to and interpretation of the Qur'aan and Sunnah.

This is a book which should be on every Muslim's bookshelf, so that he will have, at his fingertips, a concise and readily-accessible reference for the basic issues of his religion.

MSRP:
Now: £3.99
Was:
Madinah Arabic Reader Book 2 SL: 02DL1 Professor Abdul Rahim is the director of the Translation Centre of the King Fahd Quran Printing Complex and former professor of Arabic at the Islamic...
21035

MSRP:
Now: £3.00
Was:
Islamic Will & Testament & 07A ; This is a complete Islamic will & testament, with charts for inheritance, Qur'anic injunctions as well as Shari'ah compliant procedures, dos and don'ts, and...
22185

MSRP:
Now: £2.00
Was:
Smart Ark Ramadhan Calender A smart and fun way for children to get involved  with marking the days of this holy month.
24220

MSRP:
Now: £19.00
Was:
*My Ramadan Calendars are finally on their way to us, and should reach our warehouse by 21st April 2020 Insha’Allah, and as soon as they are received we will be dispatching them for next...
24172