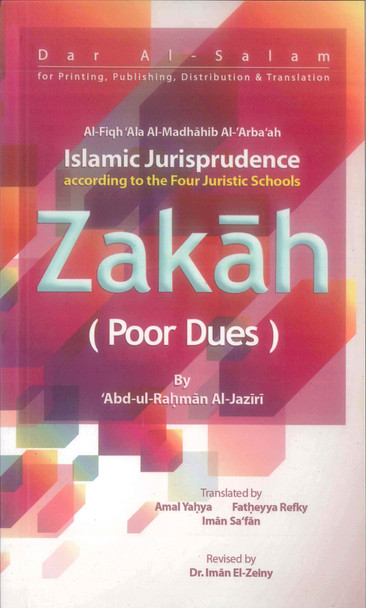 SL: 00000
This book is a translation of the section on zakāh from the Arabic book entitled Al-Fiqh ‘Ala Al-Madhāhib Al-’Arba‘ah (Islamic Jurisprudence According to the Four Juristic Schools) edited by ‘Abdul-Rahmān Al-Jazīrī. In this book, the opinions of the famous four Juristic Schools are compiled and juxtaposed. This English version gives the non-Arabic speaking Muslims a chance to know more about zakāh rulings according to the four juristic sunni schools. This is expected to help them perform this article of Islam in consonance with Islamic rulings, and choose the opinions which are more appropriate to their communities, in case of difference in legal opinions. Further, it is an important source of information to non-Muslims on zakāh which is the third pillar of Islam and the cornerstone of the Islamic economic and social systems. It is through zakāh that the problems of poverty and social disintegration can be settled.
View AllClose

MSRP:
Now: £6.00
Was:
The Mercy In The Difference of The Four Sunni Schools of Islamic Law SL: 013 SL: 014 This book is the first translation into English of a well known and widely used, six hundred year old...
21569

An Explanation Of The Four Rules Regarding Shirk

MSRP:
Now: £13.95
Was:
An Explanation Of The Four Rules Regarding Shirk SL: 000000 An Explanation of Muhammad ibn Abdul Wahhab's Four Principles of Shirk taken from the works of Abullah ibn jibrin, Salih Al al-Shaykh...
21441

MSRP:
Now: £5.95
Was:
An Explanation of Muhammad ibn Abd al-Wahhabs Four Principles of Shirk 07B In this book the author explains the dangerous concept of shirk through four simple principles. The sin of shirk ? or...
22171

The Many Shades of Shirk

MSRP:
Now: £2.50
Was:
The Many Shades of Shirk 28A In Islam, Shirk (polytheism) is the grievous sin that can not be forgiven until man turns to Allah in repentance sincerely and ask His pardon. This book deals with...
21778