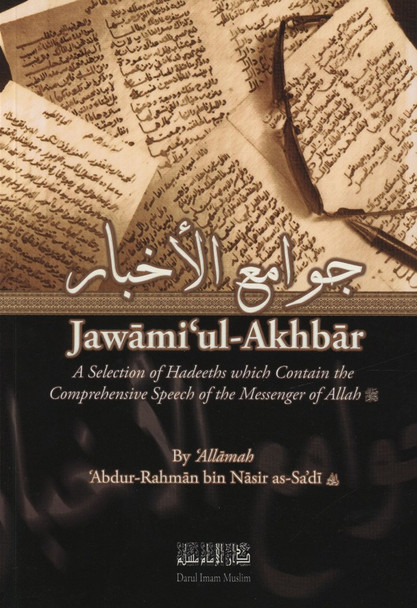 15B
A Selection of Hadeeths which Contain the Comprehensive Speech of the Messenger of ALLAH ('Allamah 'Abdur-Rahman bin Nasir as-Sa'di) This book is a collection of 99 Hadeeths which contain the concise speech of the Prophet sallallahu alaihi wa salam, compiled by 'Allaamah 'Abdur-Rahman as-Sa'di. The ability to use little words and yet carry abundant meanings is from the special qualities of the the Prophet sallallahu alaihi wa salam, who said: "I have been given the Jawami'ul-Kalim (concise speech)..." [Reported by al-Bukharee]. This collection highlights a portion of them, which the Shaykh compiled in order to explain in his book 'Bahjatul-Quloobil Abraar..'. In this publication, we have presented the original text in Arabic with full tashkeel (diactrical marks) alongside its translation in the English language. We have paid particular attention to the presentation of the book and printed the book on cream color pages in order to aid group studies and memorization. About the author: He is the noble Shaykh al-'Allaamah 'Abdur-Rahmaan bin Naasir as-Sa'di, one of the major scholars of Saudi Arabia in our present times. He excelled in the various sciences of Islam and authored many beneficial works which have been highly praised by the Scholars after him.). About Shaykh Abu Abdu-r-Rahman Nasir As-Sa'di Abd ar-Rahman ibn Nasir as-Sa'di at-Tamimi (1889 – 1956 C.E.) was a prominent Islamic scholar, jurist, exegete, and Arabic grammarian with a great interest in poetry who contributed many works on a variety of subjects. Initially, he adhered to the Hanbali school of Islamic law (madhab), as did his early teachers. He went on to study the works of Ibn Taymiyyah (d.1328) and Ibn al-Qayyim (d.1350) extensively, and, as he progressed in his studies, he no longer restricted himself to the Hanbali School, but rather followed the course he believed to be proven by the strongest evidences. He was also an expert in tafsir (Quranic exegesis or commentary), having read many books of tafsir and studied it under his teachers; he later authored a tafsir himself. From his most famous students is 'Allaamah Muhammad bin Saalih al-Uthaymeen. The Shaykh died 1376 A.H. (1957 C.E.
View AllClose

Declaring A Muslim To Be An Apostate & Its Guidelines

MSRP:
Now: £4.95
Was:
Declaring A Muslim To Be An Apostate & Its Guidelines 11B It is obligatory upon the Muslim to learn before he speaks; that he does not speak unless it is upon religious knowledge. Otherwise,...
22052

The Path to Self-Fulfilment

MSRP:
Now: £2.95
Was:
Meadows of the Divine SL: 03AL2 ALLAH's speech and mighty revelation is replete with wisdom, truth and justice. Its verses are perfected by one who is perfect; it guides those who lend their ear...
22474

MSRP:
Now: £17.00
Was:
The Ideal Muslimah  SL: 01DL2 The Ideal Muslimah is proud of the great position that Islam has given her among humanity. She performs her duties knowing that her role is clearly defined and...
21176

MSRP:
Now: £5.95
Was:
Islamic Guidelines for individuals & Social Reform 24A h Muhammad bin Jamil Zeno is originally from Syria, but for a long time he has been a teacher in Dar-ul-Hadith AlKhairiyah, Makkah...
22539

MSRP:
Now: £20.00
Was:
Tajweed Quran in Douri Reading his complete Colour Coded Tajweed Quran comes with a nice and beautiful hard cover. Interpretation of selected words is placed on the margin of each page. This...
22440