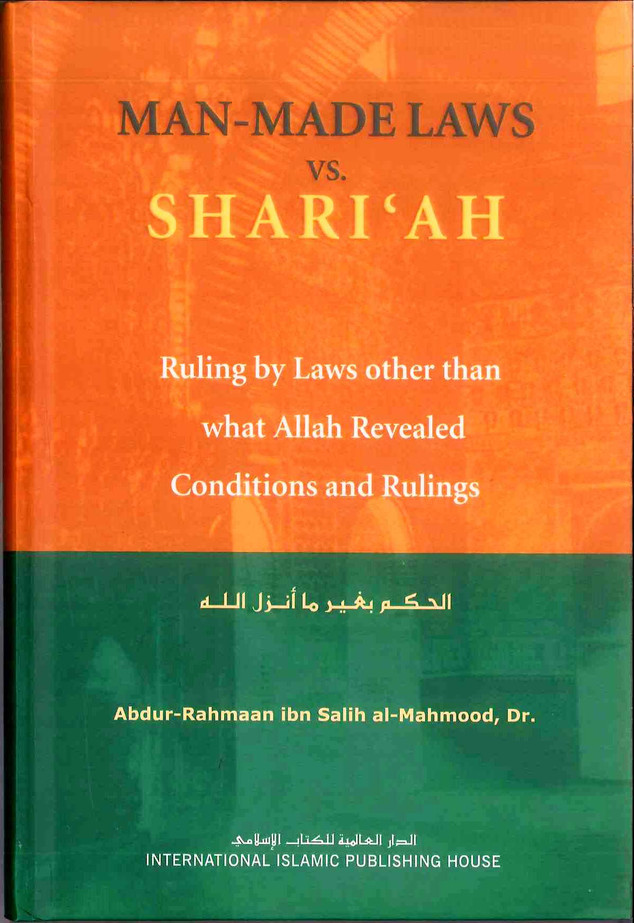 03B
Man Made Laws Vs. Shari‘ah: Ruling By Laws other than what ALLAH Revealed Conditions & Rulings This book appears at a time when many other books and ideas are being propagated to justify the status quo of the Ummah (community), and the position of those who are not ruling by that which Allah has revealed, and to detract from the seriousness of the situation. This book presents a detailed discussion of the extreme views of the Murji‘ah and the Khawârij, views which are clouding the Ummah’s vision as they have for far too long. The view of the Murji‘ah is that faith is simply a matter of belief in the heart, with no link to action. The view of the Khawârij is that any sin constitutes major kufr (unbelief), which puts a person beyond the pale of Islam. The author highlights these distorted views, then explains the middle way of Ahl as-Sunnah wal-Jamâ‘ah (the People of the Sunnah and the Community), based on the Qur’an and the Sunnah. This is the knowledge that faith is composed of both belief and action, and that it may increase and decrease. Sin does not necessarily constitute major kufr, but there are some sins which in and of themselves do constitute major kufr and put a person beyond the pale of Islam, such as ruling by something other than that which ALLAH has revealed. Then the author discusses the rulings and conditions of such situations. Once this concept is clear in the minds of ordinary Muslims, then the Muslim Ummah will not accept anything from their governments and rulers except the Shari‘ah to rule their lives, and they will realize that any other system or law is nothing more or less than deviation from Islam.
View AllClose

MSRP:
Now: £2.50
Was:
Regulations for Using Evidence in Islamic Law SL: 16B Islamic Book about the sciences of evidences in Islamic jurisprudence and the methodology of understanding the Deen of Islam by Dr. Abdel...
22144

The Hadith is Proof Itself in Belief & Laws

MSRP:
Now: £6.00
Was:
The Hadith is Proof Itself in Belief & Laws 0000 Terminology of Hadith The Necessity of Adhering to The Sunnah and Forbidding Defying it. Correct Hadith Cannot be Abandoned for Qiyas. Ahad...
23184

MSRP:
Now: £6.99
Was:
Boy vs Girl SL: 03AL3 Farhana swallowed and reached for the hijab. But then she saw with absolute clarity the weird looks from the other girls at school, and the smirks from the guys. Did she...
22617

The Innate Rights According To Islamic Laws

MSRP:
Now: £4.50
Was:
The Innate Rights According To Islamic Laws SL: 000000 Verily from the beauty of Allah legislation is that justice is established, and everything is given its rights, without excessiveness or...
21893