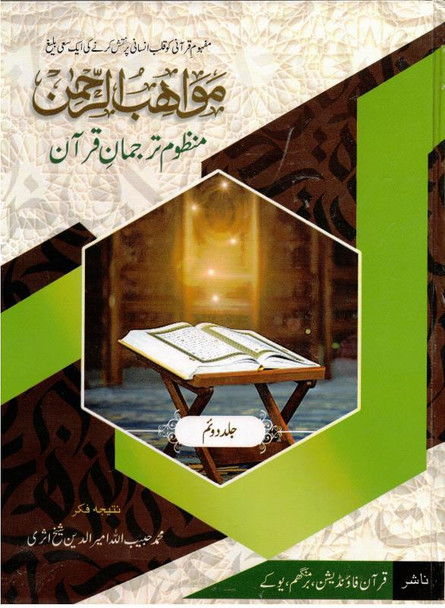 Mawahibur Rahman Manzoom Tarjuman Quran (URDU) By: Mohammad Habibullah Amiruddin Asri (UK) Mawahibur Rahman Manzoom Tarjuman Quran is a complete and direct translation in Urdu poetry of the Quran, interpreted by the author who is an academic expert in Islamic Studies (Aalim), Quranic principles and is proficient in both Arabic and Urdu. It does not represent any particular school of thought or viewpoint, but rather the correct interpretation of the Quran, authentic and without errors of belief or methodology.

Maulana Mohammad Habibullah Amiruddin Asri, graduated as an Aalim specialising in Quran and Hadith. He is well versed in Quranic Arabic, Urdu, and Persian literature. He has spent over 18 years in research works at Al-Dar Al Qayyma, India, in compiling Arabic hadith books from original manuscripts. He has been based in the UK since 1989 overseeing dawah activities at various mosques as an Imam, Khateeb and has been teaching Arabic and Quran. He is a former Imam at the Central Mosque Edinburgh and is well-known amongst learned Urdu poets and scholars.

MSRP:
Now: £2.25
Was:
Ya-Sin and Al-Rahman SL:013 This work is to help English speaking Muslims learn how to recite the surahs of the Quran. This volume covers the Surahs Yasin & Rahman. The text is transliterated...
22238

MSRP:
Now: £20.00
Was:
Enjoy Your Life Enjoy Your Life! The Art of Interpersonal Relations as Exemplified in The Prophet's Biography is a comprehensive guide towards improving interpersonal skills and hence, enjoying life...
23889

MSRP:
Now: £5.50
Was:
Sulayman ibn Qasim said, “The reward of every deed is known except for patience, for Allah Almighty Said: ‘Indeed, those who endure patiently will be given their reward in full...
25110

MSRP:
Now: £20.00
Was:
QURAN WIKI Quran Wiki starred as an online project with the aim of consolidating the best available data related to every Suran and Ayat of the Quran. Information on the themes of the Surahs,...
25049

The Final Prophet Proof of the Prophethood of Muhammad ﷺ

MSRP:
Now: £10.00
Was:
Centuries ago the final revelation revealed upon PROPHET MUHAMMAD (PBUH). This message was sent all over the world , Today trillions of people believe and follow his message . In this book the...
25109

MSRP:
Now: £40.00
Was:
Al-Muwatta of Imam Malik ibn Anas Arabic and English (25107) The Muwatta' contains a record of the exemplification by the last Messenger of Allah of the message of the Qur'an, the practice ('amal)...
25107