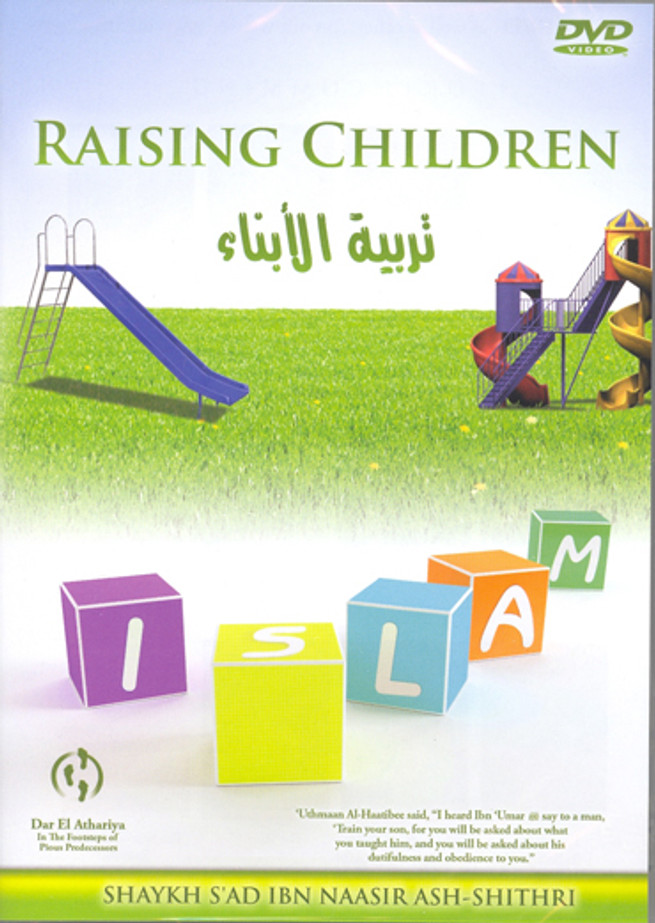 SL: 00000
This DVD relates to the matters of the Fiqh of the Muslim family, thus ensuring our children are raised with a solid foundation in the Quran & Sunnah. In order to nuture them as good muslim citizens. As stated in a statement by ibn Omar "Train your son, for you will be asked about what you taught him, and you will be asked about his dutifulness and obedience to you" Something to contemplate for us. To be sure, children are an important part of the family. Consequently, if we are talking about matters that relate to the Fiqh of the Muslim family, we should know the rulings that relate children and that relate to raising children. Every Muslim should appreciate the great importance of this subject-matter. And that is based on a number of matters. First, there are numerous texts in the Shariah which point to the subject-matter. Therefore, One of the ways in which one can draw near to one's Lord is to give this subject-matter the importance ans status it deserves. Second, children, whether now or in the future, have a great influence upon society, upon the Ummah, and, in particular, upon indiviual Muslim families. Thus we must pay attention to their upbringing, based upon what they do in the future terms of what is hoped from them, by the permission of Allah, in order to bring honour to this Nation, to save our society from evil, and to make our society united, such that all individuals among society cooperate with one another upon piety and rightueosness, so that they can relize and follow the commands of the Shariah. Third, not being concered about this subject-matter can lead to parents becoming guilty of sin - in fact, to all of society becoming guilty of sin. That will lead to dangerous consequences and will bring upon society many evils that are in unity. And it will not be able to relize what Allah wants from us in this world and the Hereafter: Therefore, we should pay serious attention to this subject-matter, and we should do so out of a desire for rewards in the Hereafter, and out of a desire to make our society achieve safety in the future.
View AllClose

MSRP:
Now: £2.50
Was:
Guidelines For Raising children 33B Islam places great emphasis on the child, right from infancy to the age of puberty. The reason for this is to prepare him to become a good member of the...
23031

A Woman's Guide To Raising A Family

MSRP:
Now: £6.00
Was:
A Woman's Guide To Raising A Family 11A The rulings and regulations of Islam have come to organize the family and to protect it from breaking up, like the rulings of marriage and divorce,...
21898

MSRP: £7.95
Now: £2.50
Was:
These under scarf Tube caps/bonnets will fit snugly around your head keeping all hair securely in place. They also help to keep your styled hijab in place and give you more coverage for your hair if...
22608