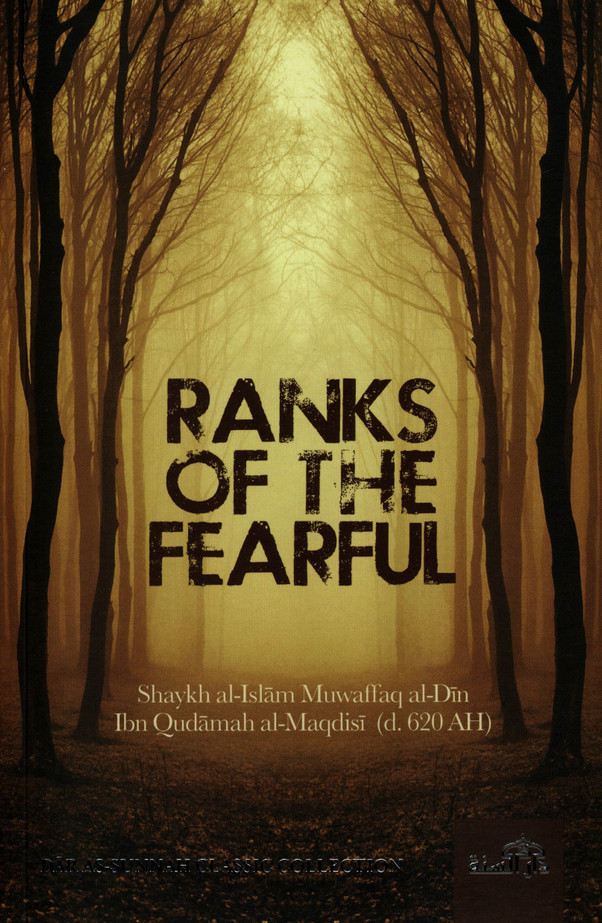 19B
Allah, the Most High, has praised those who possess the attribute of a heightened sense of fear Saying, "And such (are the believers) who are humbled by the fear of their Lord..." [Al Muminun, 57] The element of fear exists within mankind in varying degrees. When the fear of Allah is established in the hearts, it eliminates wrongdoing and attachment to worldly desires. It is a light that navigates a person through sin and temptation, and when this fear is removed, it easily leads them astray - for surely true and praiseworthy fear is being vigilant from transgressing the limits of Allah. Yet when fear exceeds its proper boundary, it gives rise to hopelessness and despair, which is equally blameworthy. The attribute of fear therefore, is not the end goal itself, but a means towards a successful end. And He also Said: "... fear Me alone, if you are believers." [Ali' Imran, 175] 'Al-Khawf ' is from the smaller works of Imam Ibn Qudamah, who is better known for authoring major authoritative treatises of Hanbali jurisprudence and doctrine. In this short book, he brings disquieting realities of fearing Allah in a unique perspective; elucidating some profound insight into the topic, its reality and merits, types and levels and cures that bring about fear. It also discusses causes that lead to a bad ending for people on this earth, while taking rooted examples from the lives of the fearful ones from among the Angels, Prophets and our righteous predecessors.
View AllClose

MSRP:
Now: $6.00
Was:
Frankincense Resin   PREMIUM QUALITY! 100% PURE | GRADE A NO FILLERS Gross Weight: 70 grm   Frankincense is tapped from the very scraggly but hardy Boswellia tree by scraping the...
24182

MSRP:
Now: $3.75
Was:
Fear Of ALLAH SL: 02CL2 This Islamic book explains the fear of ALLAH, its necessity, its virtue and its manifestation in the believers. ALLAH warns us in the Quran of those who do not fear Allah...
21287

Weeping From the Fear Of Allah

MSRP:
Now: $4.43
Was:
Weeping From the Fear Of Allah 07B This is the English translation of the Arabic booklet, al-Bukaau min Khashyatillaah by Shaykh Husayn al-Awaayishah who is one of the students of Shaykh Muhammad...
21231

MSRP:
Now: $6.75
Was:
Human Right and Racial Discrimination In Islam SL:07 It was not until man began to lose his rights that he began to recognize them and pursue them. Divine laws were sent down through prophets to...
22002

MSRP:
Now: $12.75
Was:
Upright Moral Character 10B In a time when the mases push its deficient values and misguided moral codes on the cultures of the world, it is imperative that Muslims realize the completeness of...
21496