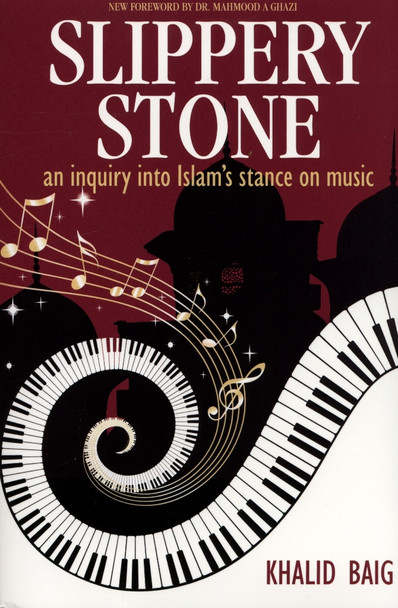 15B
What does Islam say about poetry, singing, musical instruments, musicians, and the business of music? How have Muslim societies historically looked at these questions and how have their attitudes changed in the media age? Why have mosques remained music-free while churches have not? What is the truth about the much-publicized “music controversy” in Islam? Why did Sufis call sama as the slippery stone? These are some of the questions explored in-depth in Slippery Stone: An Inquiry into Islam's Stance on Music. Of late, increasing attempts are being made to promote “Islamic music,” and the distinction between what is allowed and what is not has become hazy and unclear for many. This book demystifies the issue of music in Islam by going to original source books in Arabic, many of them brought to light for the first time in the English language. It traces the attitudes of the Muslim society about music and the musician throughout its history and quotes extensively from the deliberations of the Qur’an and Hadith scholars and jurists from all schools of Islamic Law, both Sunni and Shi'ah. Separate chapters are devoted to a discussion of the views of Sufi masters as well as the arguments of Ibn Hazm. It examines in considerable depth the impact of colonialism and the media revolution (beginning with the gramophone) on the attitudes of Muslim societies regarding music. It also subjects the works of Orientalists to a scrutiny that was overdue. By referring to it as a slippery stone, Sufis vividly pointed out the dangers associated with this enterprise and emphasized the need for caution. History is filled with the corpses of those who fell off the slippery stone by ignoring this advice. Combining historic, cultural, and jurisprudential perspectives this book brings the truth of that metaphor into sharp relief. More than six hundred references and more than a hundred twenty biographical notes on the authorities quoted add to the value of a discussion that is comprehensive without being boring, and detailed without being confusing. This book has left no stone unturned in its examination of the slippery stone. Reviews: "Appropriately titled, Slippery Stone deals with the topic of music in Islam in substantial detail clarifying all the issues on music in a lucid manner. Contemporary, convincing, comprehensive . . . this book is a must read for all who wish to learn about this subject." - Mufti Zubair Bayat "Khalid Baig has discussed relevant issues surrounding the issue of music, singing, use of musical instruments, and popular music etc., and has explained clearly what is permissible and what is prohibited by Islam . . . The extensive list of original and secondary sources used indicate the author’s grasp of the subject." - Syed Salman Nadvi, Formerly Professor and Chairman, Department of Islamic Studies, University of Durban-Westville “Khalid Baig, in his Slippery Stone, has written an impressive academic tome on the issue of music, poetry and singing in Islam. He discusses the historical development of these genres in the Muslim context, and documents various theological and legal responses that followed. This work is sure to become a standard reference in its field for many years to come." -Shaykh Yasir Qadhi, al-Maghrib Institute.
View AllClose

MSRP:
Now: £1.99
Was:
Parent's Love SL: 02DL1 Parents Love is a collection twenty-eight Islamic stories and Arabian Legends. Some of them are from the life of the Prophet Muhammad Sallallahu 'Alayhi W'alehi Wasallam and...
21053

MSRP:
Now: £5.95
Was:
Muhammad The Beloved Prophet 23A / 09B This book is written in a simple style for young children to enjoy and understand the essence of the life of the Beloved Prophet e. In 28 short chapters It...
21362

MSRP:
Now: £10.00
Was:
Singing & Music In Islamic Perspective SL: 05CL2 This compelling & beautifully researched book clarifies the rulings on Singing & Music & the harm they inflict on the heart, the...
21944

The Best Loved Prayers from the Quran

MSRP:
Now: £9.50
Was:
The Best Loved Prayers from the Quran SL: 02DL2 This selection of prayers for children of seven years and above expresses the variety and richness of prayer and is designed to be used at home, or...
22074

A Starlight View Of Islam's Past

MSRP:
Now: £7.95
Was:
Reclaiming The Mosque (The Role Of Women In Islam's House Of Worship) At a time when misogyny and hostile attitudes towards women are plaguing Muslim communities throughout the world, Dr Jasser...
23676

MSRP:
Now: £10.00
Was:
Singing & Music In Islamic Perspective SL: 05CL2 This compelling & beautifully researched book clarifies the rulings on Singing & Music & the harm they inflict on the heart, the individual, the...
21944

MSRP:
Now: £4.30
Was:
The Islamic View On Gambling & Playing Cards 11B Makkah Al Mukarramah for translation, print & distribution is pleased to present another publication to our respected readers.
22309