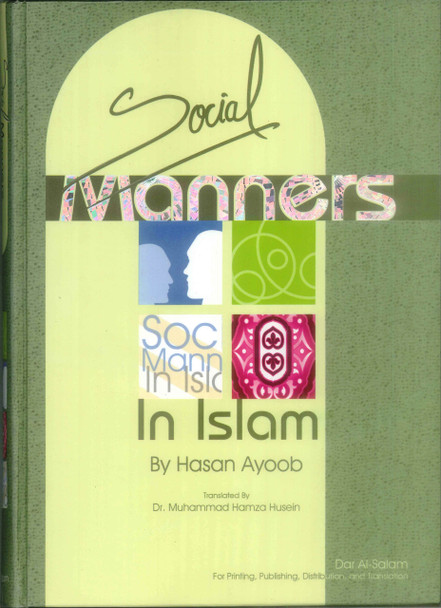 SL: 06
The subject of social manners encompasses a wide and diverse range of issues. It includes the private relations between the Muslim and his family, kin, neighbours, and employees. At the same time, it also addresses the relationship between the Muslim and his society; whether Muslims or non-Muslims. In short, the issues addressed in this book are important for every Muslim; male and female. Such issues should be taught within every home, society, and Muslim community. The book as a whole is an attempt to promote Islamic and humanitarian feelings towards Muslims, who are known through studies, to stand for nothing but goodness, mercy, civilized and humanitarian dignity. A Muslim is also good-natured, generous, truthful, and never betrays. He is neither harsh nor oppressive to the innocent, even if it be an insect. Additionally he is noble; full of dignity, and he never oppresses people, nor does he give in if oppressed, and he bows to none other than Allah even if he is threatened with torture and death.
View AllClose

MSRP:
Now: $2.25
Was:
Islam The Solution To The World’s Perplexing Social Problems 03A Today, even the Muslim society is, in general, at variance with real Islam. Yet, the teachings of Islam cater to the needs of...
21925

MSRP:
Now: $8.93
Was:
Patience & Good Manners 16B Islamic teaches us how to have patience in ease and in hardship and to maintain good manners even with those who are rude and harsh, this Islamic book by Amr Khalid...
21308

MSRP:
Now: $7.43
Was:
Islamic Manners 06B Written by one of the outstanding scholars of the 20th Century, Islamic Manners is a vital book that exemplifies the sublime Islamic personality. Shaykh Abd al-Fattah Abu...
22090

MSRP:
Now: $8.93
Was:
The Explanation of the Chapters on Knowledge, Righteousness and Good Manners 23A Darussalam UK presents a collection of selected chapters from the classical collection of hadith Riyadh Al-Saaliheen...
21205