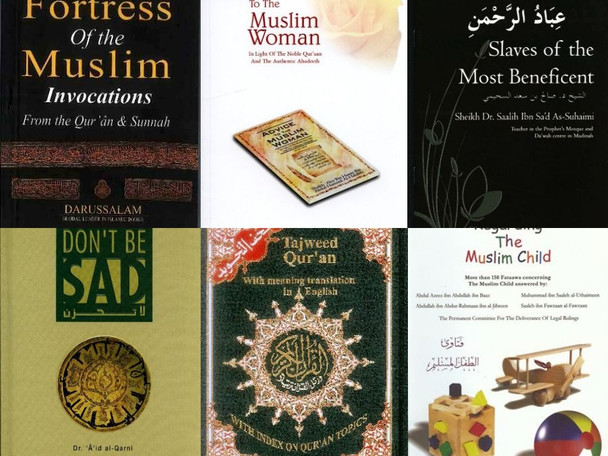 15 Attributes of Slaves of the Most Beneficent

Sheikh Dr. Saalih Ibn Sa'd As-Suhaimi (Former professor from the Islamic University of Madinah and currently a teacher in the Prophet's mosque and supervisor over Islamic callers in the Da'wah Centre in Madinah) said: "After which follows, my brother and beloved ones for the sake of Allah, we are discussing the last verses from Soorah Al-Furqaan (The Criterion). These great Verses capture the attributes of the believers and warn against some of the attributes opposing them
https://darussalam.com/15-attributes-of-slaves-of-the-most-beneficent.html

O my sister, in this book is reminder and a nourishment for this life. It is a life that could be long or short, but at the end of it, there will be death and then the grave. We want Msulim women who evaluate the matters according to the methodology of Allaah, the Greatest, and to look upon life through the Noble Quraan, to be aware of the Hereafter while she is in this world, to take Islaam as guide and way of life and the Sunnah of the Messenger
https://darussalam.com/advice-to-the-muslim-woman-1897.html

Islamic Fataawa regarding the Muslim child

It is the responsibility of every parent to ensure that their children are raised upon the correct Islamic teachings, and this is more so for those of us living in non-Muslim countries. It is a compilation of more than 150 Legal Rulings by contemporary scholars. Verdicts by Shaykh Abdul Azeez ibn Abdullah ibn Baaz, Shaykh Muhammad ibn Saaleh al-Uthaimeen, Shaykh Abdullah ibn Abdur-Rahmaan ibn al-Jibreen, and Shaykh Saaleh ibn Fawzaan al-Fawzaan.
https://darussalam.com/islamic-fataawa-regarding-the-muslim-child-2001.html

Invocations from the Qur'an & Sunnah. Translation of Hisnul-Muslim. (aka 'Citadel of the Believer') This is a very beautiful booklet consists of many authentic Dua's (supplications) for a Muslim to supplicate on a daily basis and on special occasions. Author's Note: This book is an abridgement of my earlier work entitled, Adh-Dhikr wad-Du'a wal-'llaj bir-Ruqyah mina'-Kitab was-Sunnah. In order to make it small and easily portable, I have chosen only the section on words of remembrance for this abridgement. To achieve this, I only mentioned the text of the words of remembrance instead of the entire Hadith. I also limited myself to mentioning only one or two references from the original book for each Hadith. Whoever would like to know about the Companion who related a particular Hadith, or more information about where it is recorded, should refer to the original work (mentioned above). I ask Allah the Glorious, the Mighty, by His beautiful Names and by His sublime Attributes to accept this as having been done sincerely for His sake alone. I ask Him to bring me its benefits during my lifetime and after my death. May those who read it, those who print it, or have had any role in distributing it, benefit from it also. Surely He, glory be unto Him, is Capable of all things. May the peace and blessings of Allah be upon our Prophet, Muhammad, and upon his family and Companions and whoever follows them in piety until the Day of Judgement. Said bin Ali bin Wahaf Al-Qahtani
https://darussalam.com/fortress-of-the-muslim-leather-cover-pocket-size.html

At a time in which the Muslims are beset with trials from every periphery and within, comes this heartening book rooted in the commandments of ALLAH (SWT), the Sunnah and the excellent guidance and examples of the Muslims that have come before us. DON'T BE SAD is an absolute must read for all people. It is full of practical advice on how to replace it with a pragmatic and ultimately satisfying Islamic outlook on life. It exposes to the modern reader how Islam teaches us to deal with the tests and tribulations of this world. So, take heart and hold firmly onto the rope of ALLAH.
https://darussalam.com/dont-be-sad-hardcover.html

This complete Colour Coded Tajweed Quran comes with a nice and beautiful hard cover. Meanings of the Quranic versus are translated into English and placed on the margins around the Arabic text. This Tajweed Quran is in Hafs narration. All our Tajweed Quran products - including this Quran - come with the following: 1- Colour coded letters: to present the Tajweed rules, very good and simple way to learn and apply Tajweed rules . 2- A set of very useful indexes such as: Surahs Colour Index, Subject Index. 3- Tajweed rules explained in details with helpful illustration.
https://darussalam.com/tajweed-quran-with-meanings-translation-in-english.html
View AllClose

MSRP:
Now: $22.50
Was:
This is the Turkish translation of "Don't Be Sad". This book is full of practical advice on how to banish sadness and disappointment from our lives, replacing them with a realistic and ultimately...
21378

MSRP:
Now: $16.50
Was:
Tajweed Quran Medium Arabic Only – White Paper 22A This complete Colour Coded Tajweed Quran comes with a nice and beautiful hard cover. Interpretation of selected words is placed on the...
23012

MSRP:
Now: $18.00
Was:
Tajweed Quran Arabic Only 135 (Persian/Urdu script) 15 Lines 21B A Colour Coded Quran with Colour Coded Manzils in an Arabic script that is easy to read for the non-Arabic speaking person as well...
23271

MSRP:
Now: $67.50
Was:
Tajweed Quran With Facilitation of the Ten Readings (ExtraLarge) 00000 This copy of the Tajweed Quran facilitates the understanding of the differences of words’ intonation from a narration to...
23974