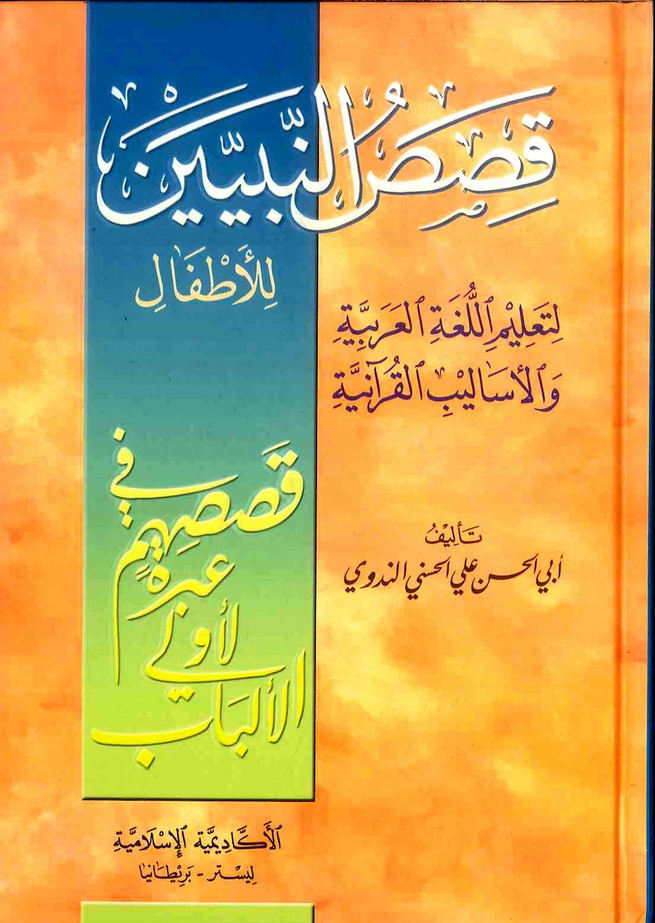 09B
An all time children's favourite, this book contains vivid portraits of fourteen major Prophets mentioned in the Qur'an. It provides insight into their struggle to serve the true God and guide their communities from going astray. A lively Arabic original with carefully worded questions for each chapter (workbook), transliteration table and a comprehensive glossary of Arabic terms which also makes it suitable for classroom use as a textbook. This is Part of a series developed by Shaykh Abul Hasan Ali Nadwi because the Arabic Books available for teaching students of advanced Arabic were mostly secular, and it was thought that it would be better to have these Books which would also teach certain Islamic Basics. They are in use in Many Darul-Ulums in India and Pakistan as well in Many Universities in Arab Countries Sheikh Syed Abul Hasan 'Ali Nadwi, one of the most prolific writers and original thinkers of our time, author of well over fifty books in various languages, and a scholar of rare distinction, passed into the mercy of Allah in December 1999. Maulana was a founder member of the Muslim World League (Rabita), a member of the Organisation of Islamic Conference (OIC), a member of the World Supreme Council of Mosques, and a member of the Fiqh Council of Rabita. He was also a member of Advisory Council of the Islamic University of Madinah al-Munawwarah, a member of its Supreme Council, and a member of the Academy of Arts and Letters of Damascus, Syria. He was also a founder member of the League of the Islamic Literature in India. Perhaps better known as a member and rector of Nadwatul Ulama (India), and president of the Academy of Islamic Research and Publications.
View AllClose

The story of prophet abraham DVD

MSRP:
Now: £15.00
Was:
The story of prophet abraham DVD SL: 00000 The Story of Prophet Abraham (DVD)Features: The story of AbrahamQuiztime with ZakyWhat I learnt from Abraham Did you know?Allah knows video clip.
21707

The Prophet Muhammad Stories for Children

Stories of the Prophets (UKIA)

MSRP:
Now: £7.95
Was:
Stories of the Prophets (UKIA)09B   STORIES OF THE PROPHETS presents the lives of Allah's major Prophets. These stories have been widely used as textbooks throughout the Arab...
21341