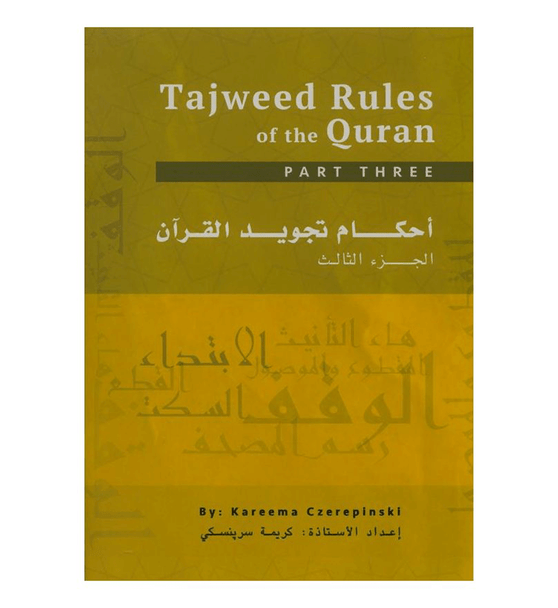 This is the third and final part of a three part series in English on the rules of tajweed the Qur'an for the recitation of Hafs from 'Aasim by the way of Ash-Shaatibiyyah. These books are meant as a guide for non-Arabs with a good grasp of English for studying tajweed of the Glorious Qur'an. This final book explains the stop and start when reading the Glorious Qur'an, and gives details as to what kind of stop is allowed, what kind is preferred, and what kind of stop is forbidden. Stopping on the ends of words with strong endings (consonants) and rules for what is allowed on the last letter of the word is described, including ar-room (الروم) and al-ishmaam (الإشمام). Stopping on the ends of words with weak endings (words ending in the alif, ya' or wow) and different rules and explanations for these type of words is clarified. One important aspect of Qur'an recitation is knowing and understanding which word combinations are written together and which separately in different parts of the Qur'an as well as in which places of the Qur'an are some words are written the female haa (هاء), and in which places they are written with the taa (تاء). This part lays out the different places in the Qur’an these occurrences take place, so the reader knows how he/she can stop on these words. The words that are read in a special way, or have two allowed ways for the reading of Hafs from 'Aasim by the way of Ash-Shaatibiyyah are detailed in this book. The history of the writing of the Glorious Qur'an (رسم) and the general rules for the writing of the Qur'an are laid out in the last chapter of this part. This last part of the three parts on tajweed is for students who have studied and mastered the other two parts, or have studied everything covered in the first two parts. The explanations of the different subjects are in English, and the Arabic terms are translated. The goal is always to assist the students in understanding and to encourage them to learn the Arabic terms and definitions. The three parts of this series on tajweed rules of the Glorious Qur'an should facilitate non-Arabic speaking students of the Qur’an whether they are in a classroom with an Arabic medium for teaching or English. With this third part completed, insha' Allah the non-Arab English speaking student of the Qur'an will find a complete curriculum and explanation of the tajweed rules for the recitation of Hafs 'an 'Aasim from the way of Ash-Shatibiyyah in any classroom or study situation that he/she may find themselves in. These three parts are only guidance; the real goal is reciting and applying all the different rules correction which can only be done by reciting to and being corrected by a qualified teacher of the Qur’an.
View AllClose

MSRP:
Now: £6.99
Was:
Tajweed Rules of the Quran part Two By Allah's grace, this is the second part of what shall be, insha' Allah, a three part series on the rules of tajweed of the Qur'an, for the recitation of Hafs...
23554

The Golden Path for Teenagers

MSRP:
Now: £24.55
Was:
Description This is whole Tajweed Qur'an divided in to 4 large parts, each part comes with a nice hard cover, each page contains 15 lines as any standard Quran, comes with...
24272