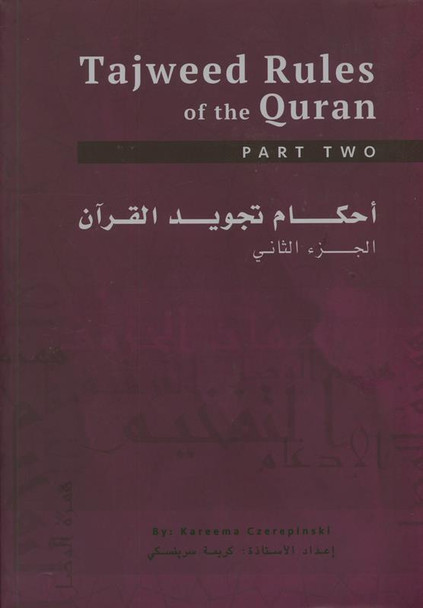 By Allah's grace, this is the second part of what shall be, insha' Allah, a three part series on the rules of tajweed of the Qur'an, for the recitation of Hafs from 'Aasim by the way of Ash-Shaatibiyyah. The book is intended to be a guide for non-Arabs with a good grasp in English in studying tajweed. This book explains the concept of the accent (an-nabr) in the recitation of the Glorious Qur'an and the conditions of its use, it also defines and explains the important chapter on the characteristics of the letters, velarization and attenuation (tafkheem and tarqeeq) are covered in this part, as well as the concept of the two alike, the two similar, the two close, and the two far and the rules for idghaam and ith-haar in these different relationships. A brief introductory to grammar terms is made in this book to assist the student in understanding the last chapter, that of the connecting hamzah (hamzah al-wasl). The explanations of the different subjects are in English, and the Arabic terms are translated. This is to assist the student in understanding and encourage them to learn the Arabic definitions and terms. This book should facilitate non-Arabs studying tajweed whether they are in a classroom with explanations taught in Arabic or in English. This book cannot replace the importance of reciting to and being corrected by a trained teacher of tajweed, instead it is a guide and an aid in understanding the concepts of tajweed, the application can only be refined by recitation and correction.
View AllClose

MSRP:
Now: €16.29
Was:
Fiqh al Haya: Understanding the Islamic Concept of Modesty A trademark quality of our religion, haya encapsulates the very spirit of Islam. It is a means for all human beings to become...
23534

Holy Quran without Translation (93B)

MSRP:
Now: €8.28
Was:
Tajweed Rules of the Quran part One This book explains the articulation points of the Arabic letters, the rules of noon saakinah, meem saakinah, and lam saakinah. It explains all of the different...
1020

MSRP:
Now: €13.03
Was:
Tajweed Rules for Qur'anic Recitation(A Beginners Guide) 01CL2 For every letter of the Qur’an that a Muslim recites, s/he is rewarded ten times over. This immense reward for such a seemingly...
23213