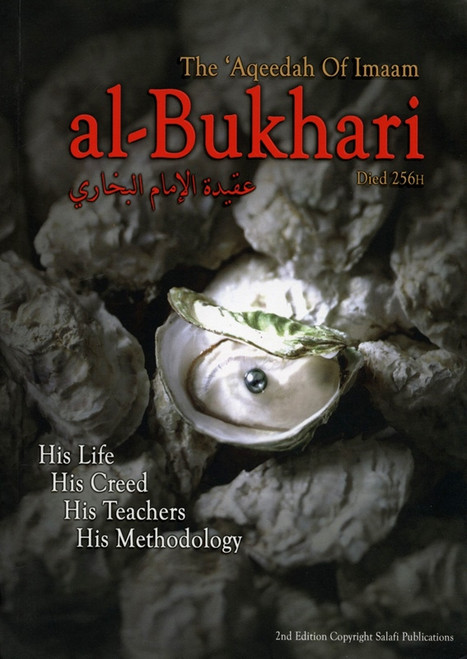 SL: 13A
Imaam Al Bukharee states that he spent over forty six years travelling around the various Islamic lands, benefiting from the scholars of his time. He met over a thousand scholars, and took knowledge from and imparted knowledge to them. This book is a translation of a treatise narrated from Imam Bukharee contained in the encyclopedia of the Aqeedah known as, Sharh Usool Itiqaad Ahlus Sunnah Wal Jamaa'ah. (Explanation Of The Fundamentals Of The Creed Of Ahlus-Sunnah Wal-Jamaa'ah) of Imaam Al-Laalikaa'ee (Died 418 AH). So this book, O Muslim, is a translation of some of the points of the Creed of Ahlus Sunnah Wal Jamaah. The text is as relevant today as it was over one thousand years ago, if not more so, since confusion regarding matters of Manhaj and Aqeedah (Methodology and Creed) has increased. As Imam Maalik Bin Anas (Died 179 AH) said, The latter part of this Ummah will not be rectified except by that which rectified its earliest part.
View AllClose

MSRP:
Now: $15.52
Was:
Notes on Al-Aqidah al Wasitiyah By Sh. Saleh al-Uthaymin 10B This is Shaykh al-‘Uthaymin’s abridged version of his lengthy work, Sharh al-‘Aqidah al-Wasitiyah, which is a formidable explanation...
DS10420

MSRP:
Now: $32.48
Was:
Al Aqidah Al Wasitiyyah 2 Volume Set 23B Written in response to a request from a Shafi'i Judge from Wasit, Iraq, ibn Taymiyyah penned this creed encapsulating the belief taught by the Prophet...
DS10728

Explanation of the Aqeedah of the Imaam, the Reformer, Muhammad Ibn Abdul Wahhaab

MSRP:
Now: $18.12
Was:
Explanation of the Aqeedah of the Imaam, the Reformer, Muhammad Ibn Abdul Wahhaab 11B So when the call to Tawheed in this land began to shine - and the praise is for Allaah - upon the hand of the...
DS10508

The Advice Of Luqman The Wise To His Son

MSRP:
Now: $4.55
Was:
The Advice Of Luqman The Wise To His Son 00000 I wished that we ponder over these verses that gather issues of belief, worship, manners and enjoining the good and forbidding the evil. These...
DS13070

MSRP:
Now: $6.50
Was:
In Defence of the Four Imams 00000 ■ Why did the distinguished jurists, notably the Four Imams of early Muslim history differ? ■ Why do some of their views apparently contradict authentic...
DS13001

MSRP:
Now: $10.39
Was:
With The Turk In Wartime 00000 in 1913, four years before he converted to Islam and seventeen years before he would publish his renowened translation of the Quran, Marmaduke Pickthall journeyed...
DS12999

MSRP:
Now: $8.12
Was:
Islamic Curriculum Workbook 6 (Girls) 00000 The sixth part of the Islamic Curriculum series. Key topics of this part include; lessons on maturity in girls, impurities, ahadith on major sins,...
DS12929