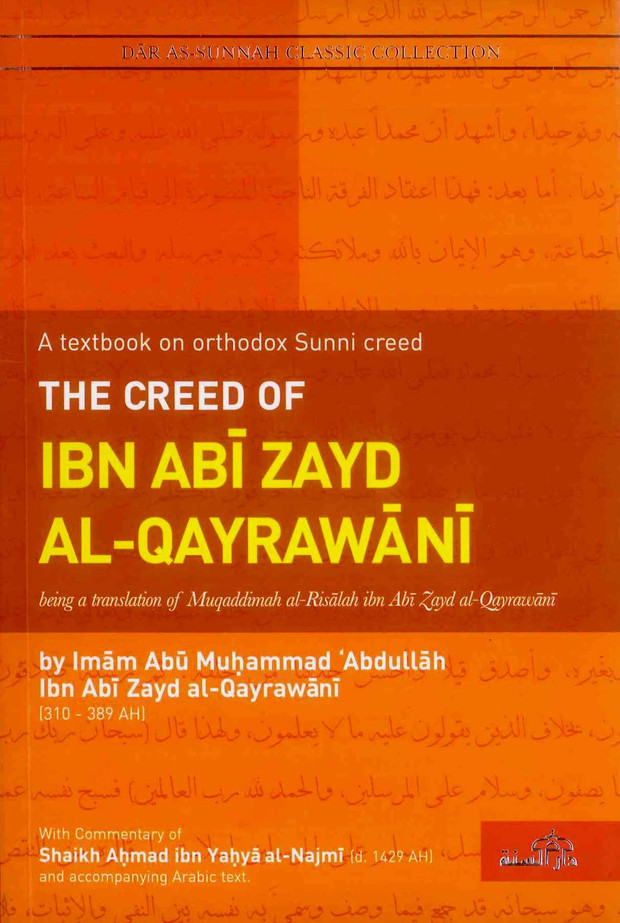 19B
The Creed Of Ibn Abi Zayd Al-Qayrawani By Imaam Abu Muhammad Abdullah Ibn Abi Zayd Al Qayrawani The author was asked to write a short treatise on the fundamentals of belief and creed of Ahlus Sunnah Wal Jamaah. This work was written in response to that request, wherein the author explains the obligatory aspects of Islam, those that should be pronounced by the tongue, believed in the heart, acted upon the limbs and acts of Sunnah related to the foundations of faith. - This detailed work covers many aspects of faith, jurisprudence and character. It commences with belief in Allah, His Names and Attributes and the applied principles in understanding them. It also discusses the Quran, seeing Allah, punishment of the grave and events that will occur therein, the Divine Decree, companions of Allah's messenger and other important aspects of faith. He calls to following the way of the Salaf and adhering to the knowledge and guidance they left for the community. - Creed is not just mere code of belief but it has a practical role, which translates into qualities, characteristics and actions that every Muslim must adhere to and accompany. When writing this tract the author has kept the young and mature in mind, hence keeping the work very simple to read and understand - placing it ideally as an educational textbook. Knowing the creed of Ahlus Sunnah Wal Jamaah is compulsory for every Muslim, learning and memorising it is also an important aspect of this pristine faith. - Imam Ibn Abi Zayd Al-Qayrawani was a leading imam and an Islamic scholar from North Africa. He was an exegete and a jurist who was known as 'little Malik' because of his vast knowledge and expertise in the Maliki school of fiqh. He authored over thirty works on various Islamic disciplines. Imam al-Dhahabi said of him, "He, may Allah have mercy on him, was upon the way of the pious predecessors concerning the fundamentals of Islam". He was very pious, deeply religious and steadfast in his adherence to the Sunnah.
View AllClose

MSRP:
Now: £6.00
Was:
The book is a collection of supplications taught by the Messenger of Allah, peace be upon him. It has been very popular text and translated in many languages; it is the first time that it is...
24114

MSRP:
Now: £9.50
Was:
The keys to happiness (ibn Al-Qayyim series) explained by Muhammad Al-Jamee 11A Happiness is something that every human desires and pursues, but people have different options on what happiness...
22455