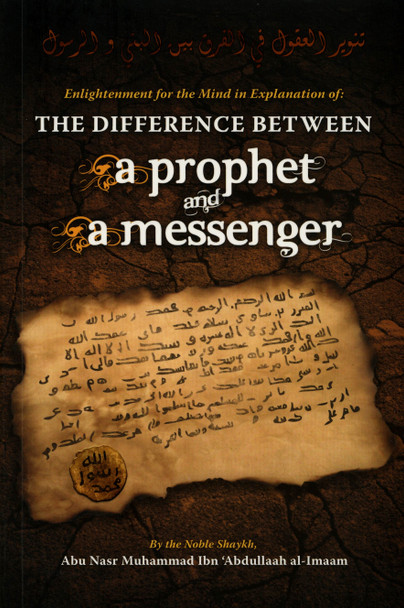 From the pillars of the Islam is the belief in the Prophets and Messengers. The book before you explains this belief and educates the reader upon the upright creed of ahlus-sunnah wal-jama'aah without tafreet (neglect) or ifraat (exaggeration).

The author lists twelve differences between a Prophet and a Messenger:

The First: The Prophet is the one who Allah Informs

The Second: Most of the Messengers were sent to a Disbelieving People

The Third: The Messenger is sent with the Language of his People

The Fourth: The Messengers continue Conveying the Religion of Allah to their people up until they embrace Islam or Allah destroys them

The Fifth: The Messengers’ Legislation was Different in Most Cases

The Sixth: The First of the Messengers was Nooh (‘alayhi salaam)

The Seventh: The Difference between the Number of Prophets and Messengers

The Eighth: The Saving of the Messengers

The Ninth: The Messengers were denied by their People

The Tenth: There are Specific Rights of the Messengers

The Eleventh: The Agreement amongst the Scholars upon One Statement – that Maryam, Aasiyah, Haajar and the Mother of Moosaa – were not Messengers…

The Twelfth: The Virtue of the Messengers over the Prophets

After establishing these differences and the importance of having a correct understanding of the issue, the author discusses the need for Prophets and Messengers and the Wisdom behind them being sent by Allaah to Mankind.  He dispels prevalent misconceptions and errors, including those who claim, "There is no difference between the Prophets and Messengers." He illustrates the correct understanding and status of the awliyaa and concludes by addressing and refuting the horrible errors and gross exaggeration of the some of the deviated sects. A comprehensive read on a matter that is widely misunderstood.

In The Company Of Prophet God’s Chosen Messenger

MSRP:
Now: £5.00
Was:
In The Company Of Prophet God’s Chosen Messenger SL:15B God chose Muhammad to be His final Messenger to humanity & God made him a model for people to follow : Truly in the Messenger of Allah...
22262

MSRP:
Now: £3.95
Was:
Educating The Women And Nurturing Them SL: 00000 Verily your prevention of woman from learning and restricting her to just learning how to read the letters of the Holy Qur'an without comprehending...
21941