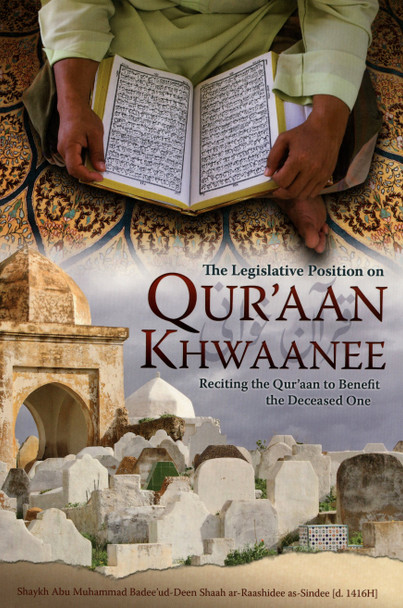 On the authority of Abu Hurayrah who said, the Messenger of Allah (e) said, ‘if a person dies, his actions cease except for three: A righteous child who makes du’aa for him, the continual charity that remains after he has died, and beneficial knowledge (that people benefit from)

A discussion on the common practise of Qur’an Khwaanee, reciting the Qur’an, alone or often in a group intending that the reward be granted to the deceased one. A practise that is often done to commemorate monthly or annual anniversaries of a friend or relative who passed away. This is a prevalent event which encompasses much of the Muslim world and has been passed down generation upon generation and is widely accepted and considered praiseworthy by many Muslims. The author keenly identifies several key topics relative to the discussion such as:

• A look at the actions of the Companions, was this from their practise?

• The dangers of innovatory practises as it relates to Islam

• The statements of the scholars of old on the topic

MSRP:
Now: £5.95
Was:
Fortification of the Muslim Through Remembrance & Supplication From Qur'aan and the Sunnah 0000 This is the famous little book of dua's popular all across the world. It includes original Arabic...
23245

Wonderful Scientific Signs In The Qur'aan

MSRP:
Now: £4.99
Was:
Wonderful Scientific Signs In The Qur'aan 16A A look at the miraculous nature of the Quran including the scientific miracles and incredible examples of accurate scientific facts found in the Quran...
21329

The Rights of The Children According to The Qur'aan & Sunnah

MSRP:
Now: £5.00
Was:
Children's Qur'aan-Sunnah Book 5B This book will help children to learn a few verses of the Qur’an and Hadeeth to reflect on in their early life. This will help them to stay on the right path...
23188

The precise verdicts regarding the deviant methodologies

MSRP:
Now: £8.00
Was:
The precise verdicts regarding the deviant methodologies 10B I have read these questions and answers that specifically address the call of these foreign methodologies, which have mixed truth with...
22391

A Refutation Of Orientialist Attempts To Distort The Qur'an and Sunnah

MSRP:
Now: £5.50
Was:
A Refutation Of Orientialist Attempts To Distort The Qur'an and Sunnah 16A Even since the time that Islam rose to spread its light across the middle East, North Africa, Spain and parts of Europe,...
21311