The Pagan Roots Of Christmas 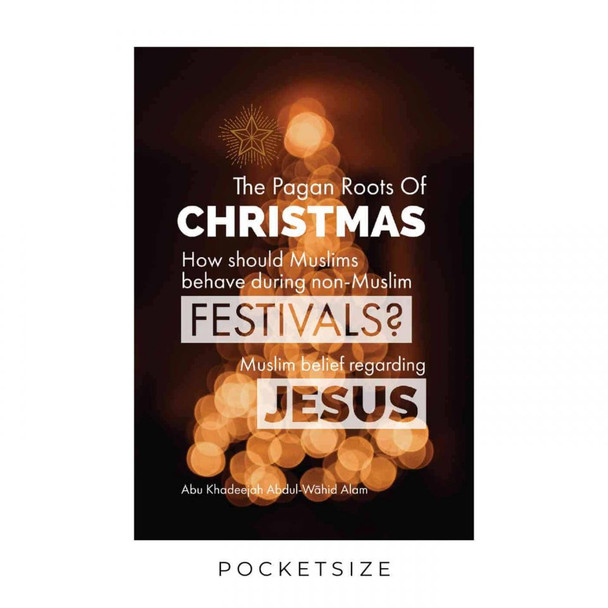 The Pagan Roots Of Christmas

The word ‘Christmas’ means ‘mass of Christ’ which later became shortened to ‘Christ-mass’. It was the Roman Catholic Church who spread the term among other Christian denominations and non-Christians. So where did the Catholic Church get the celebration from? It is not in the New Testament, and certainly not in the Old Testament. The 1911 edition of Catholic Encyclopedia itself states, “Christmas was not among the earliest festivals of the church. The first evidence of the feast comes from Egypt… Pagan customs centring around the month of January gravitated to Christmas.” This book provides a short but valuable discussion that looks at non-Muslim festivals and the Muslim belief in Jesus in the light of the Islamic texts.

MSRP:
Now: £5.99
Was:
Your favourite Companions, Now in Your Pocket By now, you probably know that the Sahaba were legends, the likes of which this Ummah has never seen since their time. You know that they are so...
21437

What to Say When

MSRP:
Now: £1.99
Was:
Qibla Arrow Give Your Life a Sense of Direction Have you walked into a room and spent ages trying to figure out what direction of the Qibla must be? Surely, someone must have figured it out...
22117

MSRP:
Now: £11.99
Was:
Juz Amma How to Get Your Child’s Quran Relationship off to Flying Start   Does your child struggle to progress in their Quran reading? Are they bored in their lessons? Are they taking...
24112

MSRP:
Now: £64.99
Was:
Kiitab can speak any word that you touch it with, allowing you to listen to Arabic words being pronounced perfectly at your convenience and without the need for a teacher...
24113

MSRP:
Now: £3.50
Was:
It is never too early to start thinking about your child’s education. These beautiful, fun posters will provide visual stimulation and help familiarise your child with Arabic text from...
24841

The Origins Of The Celebration Of The Prophet's Birthday

MSRP:
Now: £1.95
Was:
One of the most talked about, hotly debated and controversial subjects of discussion amongst Muslims for a long time has been whether or not it is permitted to celebrate the birthday of the Prophet...
24836

The Khulasa : The Cream Of Remembrance

MSRP:
Now: £30.00
Was:
In The Name Of Allah, the Most Compassionate, the Most Merciful. Praise be to Allah; may the Blessings and Peace of Allah be upon his Messenger, Our master Muhammad bin Abdillah, and upon his...
24838

MSRP:
Now: £64.99
Was:
Kiitab can speak any word that you touch it with, allowing you to listen to Arabic words being pronounced perfectly at your convenience and without the need for a teacher...
24113