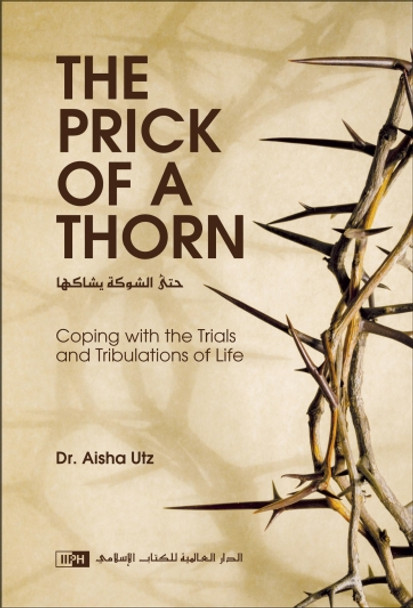 The Prick of a Thorn: Coping with the Trials and Tribulation of Life

The Prick of a Thorn by Dr Aisha Utz Here’s a taste of what’s inside: The more trials you face, the more sins you reduce… A Muslim female professional, whom I had met just after beginning a new position in the university, requested a private meeting with me. As we settled into her office, she began to share with me the story of her young daughter who had been suffering from a serious, potentially fatal medical condition for several years. She proceeded to describe the treatments, surgeries, and recurring visits to medical specialists, sometimes in other countries. As she related the details of her story, she burst into tears, and expressed intense feelings of guilt and grief related to the situation. She was plagued by nagging thoughts of being responsible for her daughter’s illness, and being punished by Allah for the misdeeds that she may have committed. She had also been suffering from some mild symptoms of depression, which were beginning to interfere with her ability to function normally at work and at home. Doctors had suggested another surgery for her daughter that could potentially be life-threatening, and she doubted whether she had the capacity to cope with the added stress of such an event. I spent an hour, counselling her from an Islamic perspective, and providing her various explanations and coping mechanisms while also integrating Qurʼanic verses and hadiths (statements or actions of Prophet Muhammad [sa]) into the conversation as appropriate. The outcome of that hour-long session was truly amazing. Due to her level of faith, she readily responded to my suggestions, and took to heart what I had to say. While she primarily required some clarification, reminders, and redirection, the effect was profound. I spoke to her again, a week or so later, and she reported that she was functioning well. She thanked me for what I had done.
View AllClose

Kitab At Tabaqat Al Kabir(volume 3 The women of Madina)

MSRP:
Now: £7.00
Was:
Kitab At Tabaqat Al Kabir(volume 111 The women of Madina) 20B Which deals exclusively with the women who met the Prophet Muhammad, blessings and peace be on him and on his family and Companions,...
22906

MSRP:
Now: £8.50
Was:
The Explanation of Chapters on Patience, Greetings & Advice on women by Shaykh Uthaymeen – From the Cassical Collection of Hadith Sharah Riyadh Al-Saaliheen الشراح رياض الصالحين by Imam An-Nawawi...
23044