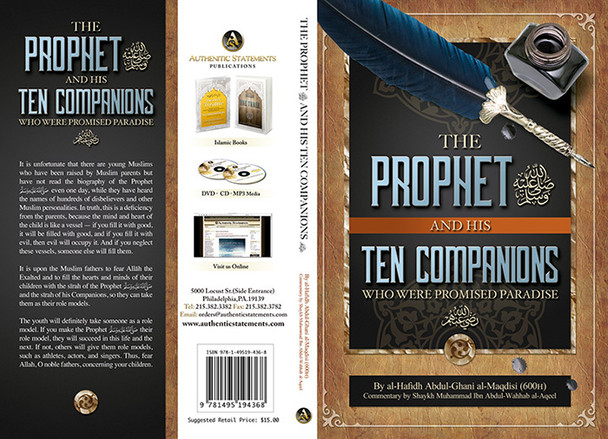 The Prophet ﷺ and His Ten Companions رضي الله عنهم by al-Ḥāfiẓ ‘Abdul-Ghāni al-Maqdisi (600 AH) Explained by Shaykh Muḥammad bin ‘Abdul-Wahhāb al-‘Aqīl, It is unfortunate that there are young Muslims who have been raised by Muslim parents but have not read the biography of the Prophet ﷺ even one day, while they have heard the names of hundreds of disbelievers and other Muslim personalities. In truth, this is a deficiency from the parents, because the mind and heart of the child is like a vessel — if you fill it with good, it will be filled with good, and if you fill it with evil, then evil will occupy it. And if you neglect these vessels, someone else will fill them. It is upon the Muslim fathers to fear Allāh the Exalted and to fill the hearts and minds of their children with the sīrah of the Prophet ﷺ and the sīrah of his Companions, so they can take them as their role models. The youth will definitely take someone as a role model. If you make the Prophet ﷺ their role model, they will succeed in this life and the next. If not, others will give them role models, such as athletes, actors, and singers. Thus, fear Allah, O noble fathers, concerning your children.
View AllClose

MSRP:
Now: €5.86
Was:
Hijra: Story and Significance HIJRA: STORY AND SIGNIFICANCE is a timely work in which Dr. Zakaria Bashier gives a moving account of the story of Hijra, a story of endurance and triumph in the...
23826

MSRP:
Now: €9.48
Was:
Miraculous Happenings in the Year of the Elephant The greedy and power-hungry king Abrahah intends to divert the world’s pilgrims from the Kaba, the House of Allah in Makkah, to the cathedral...
23831

MSRP:
Now: €35.54
Was:
Spanish - El Eden De Los Virtuosos (Riyad-us-Saliheen) : 2 Volume Set This is a Spanish translation of the famous text Riyâdh as-Saliheen (or The Gardens of the Righteous) compiled by Imam...
23883

MSRP:
Now: €5.33
Was:
The Little Arabic Alphabet Book SL: 03EL2 A colourful illustrated Quranic Arabic Alphabet book with pictures and word in transliteration to help with pronunciation. The book has the Arabic letter...
23885

MSRP:
Now: €5.92
Was:
The Story of a Priest who Embraced Islam “Imam Ibn Baz said: ‘If Islam and its beautiful characteristics were to be explained to the disbelievers they would enter into it in large crowds...
23949

MSRP:
Now: €23.70
Was:
Towards Understanding of Tadmuriyyah The Tadmuriyyah is a treatise written by Ibn Taymiyyah. The famous scholar of Islam, who strives always against the Bid'ah (innovation) until the end of his...
23957

MSRP:
Now: €29.62
Was:
The following is an explanation of some verses from the Mighty Book of Allāh. I wrote it because, while reciting the Noble Qur'ān, I pass by some verses and some of the treasures therein come...
23947

MSRP:
Now: €17.77
Was:
Fleeing from the Fire 00000 Hell is the final abode prepared by Allah, the Most High for those do not believe in Him, those who transgress against His Laws and deny His Messengers. It epitomises...
23930