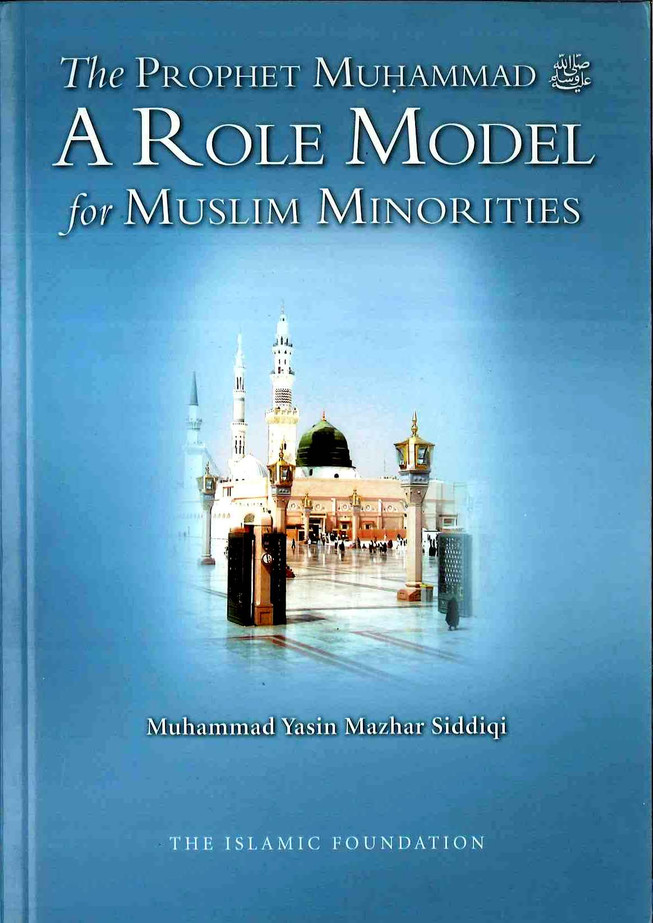 ''The Prophet Muhammad May ALLAH Bless him and grant him peace, A Role Model for Muslim Minorities'' ; studies the Prophet Muhammad's صلی الله علیه وآله وسلم illustrious life from a refreshingly new angle. It identifies what guidance the Prophet's May Allah bless him and grant him peace, example offers for Muslims living as a minority. So doing, the author examines insightfully how Islam was practised in Makkah, how Muslims led their lives as migrants in Abyssinia and how Muslim minorities were treated by the Islamic state of Madinah. Extract from the book:''The faith of Islam always had its beginning and progress in a polity dominated by non-Muslims. Muslims were always in minority in their town. It helped establish their identity in a multi-faith, pluralistic society. Their religious order was set up in opposition to the mainstream culture and civilization. Little wonder then that Islam faced stiff opposition. The old order could not put up with the reform introduced by Islam. The battle between the old and the new orders led to many outcomes. In the phase preceding the Prophet Muhammad's advent, ancestral faith generally gained ascendancy while the true monotheists were exiled and martyred. Earlier believers were sometimes rewarded with success or gained power in their land of emigration. At times the whole community was transformed. Muslims believe the Prophet Muhammad صلی الله علیه وآله وسلم was the final Messenger and Islam the universal, eternal faith for everyone. It was, therefore, inevitable that his message be preserved for ever. Accordingly it is destined that Islam had its beginning and evolution in the non-Muslim milieu of Makkah.''
View AllClose

MSRP:
Now: £9.50
Was:
The Legacy of the Prophet صلی الله علیه وآله وسلم 19B The spiritual and worldly life of a Muslim is focused on Allah. Succcess in both entails knowing ALLAH, Loving Him, trusting Him and...
21102

MSRP:
Now: £3.95
Was:
The Seerah of Prophet Muhammad صلی الله علیه وآله وسلم Part 2 SL: 16A The seerah, story of the prophet from before his birth until his successors after him as told by Imam ibn Katheer, translated...
22151

MSRP:
Now: £4.95
Was:
The Islamic Concept of Justice 16A About The Book: This Islamic book about justice, fairness and removing disputes and oppression looks at the concept of justice in light of the Qur'an and Sunnah...
21301

MSRP:
Now: £7.95
Was:
Stories of the Prophets ( Arabic ) Kisass An nabiyin 09B An all time children's favourite, this book contains vivid portraits of fourteen major Prophets mentioned in the Qur'an. It provides...
21337