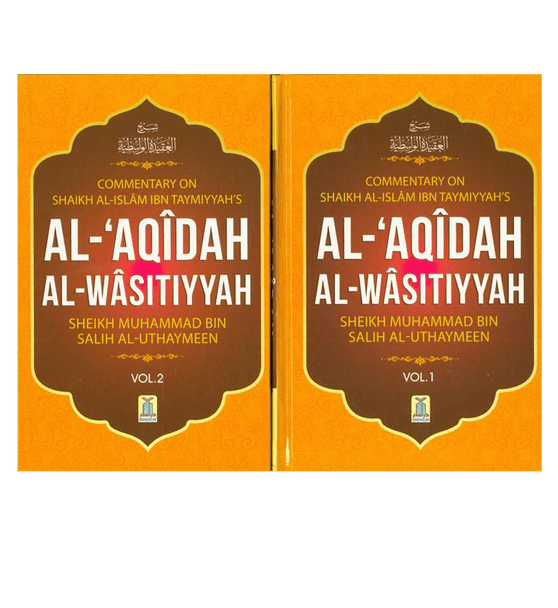 A detailed commentary/explanation of the famous writing of Shaikh Al-Islam Ibn Taymiyyah, al-Aqeedatul-Wasitiyah, done by the noble Shaykh, Muhammad Ibn Saalih al-'Uthaymeen (Rahimahumullaah). Two large deluxe volumes contain a detailed study/explanation on the topic of creed/aqeedah (belief in oneness of Allah). Written in response to a request from a judge from Wasit, Iraq, ibn Taymiyyah penned this creed encapsulating the belief taught by the Prophet Muhammad صلی الله علیه وآله وسلم. In his own words. The eminent scholar of Islam, Sheikh-ul-Islam Imam Ibn Taimiyah, discusses the real & original faith of Islam according to the Qur'an & Sunnah. It deals with the perfect and undefiled Islamic Faith and Creed of the As-Salaf-As-Salih (Pious Predecessors) particularly in regards to ALLAH's names and attributes, with solid arguments in brief words and terminologies. The book is highly appreciated by the scholars for its brevity as well as comprehensiveness; and for its contents produced in line with the Qur'an and Sunnah in an appealing and manifest..
View AllClose

MSRP:
Now: £6.00
Was:
An Nawawi’s 40 Hadith Imam Nawawi had a very short life of 44 years, but even during this short period, he wrote a large number of books on various subjects. Nearly every work is a masterpiece and a...
23776

MSRP:
Now: £15.00
Was:
"Depression, anxiety and loneliness are common problems today. Envy, greed, and materialism invade our hearts and poison our relationships and lives. Racism, warfare, and economic deprivation...
23866

MSRP:
Now: £199.95
Was:
Tafseer As-Sa'di 10 Volumes SL: 03EL2 For the first time in the English language, the complete translated version of the brilliant Tafseer As-Sa'di by Shaykh Abdur Rahman al-Sa'di (teacher of...
23881