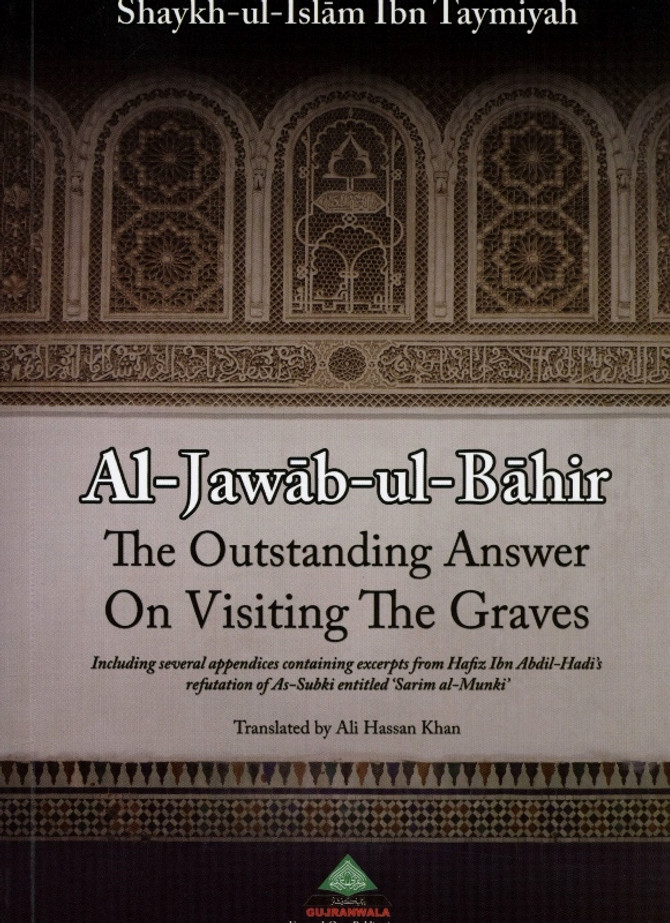 SL:15B
Al Jawab Ul Bahir The Outstanding Answers On Visiting The Graves by Shaykh ul Islam Ibn Taymiyah The Outstanding Answer on Visiting the Graves deals with the important subject of travelling to other then the three Masjids (Masjid-ul-Haram in Makkah, Masjid-un-Nabawy in Madinah and baytul Maqdis in Palestine) in order to visit the graves of prophets and saints. This book is fact a discourse which shaykh al-Islam wrote to An-Nasir, the sultan of his time, clarifying his position on this controversial subject. It was his position which his enemies later distorted and utilised as a means to have him imprisoned in Damascus, wherein he remained until his death in the year 721 A.H. Moreover, Taqiyudin as-subki wrote a book entitled shifa as-siqam in which he tried to refute Ibn Taymiyah by authenticating some weak and fabricated narrations on the virtues of visiting the grave of the Prophet (PBUH) Hafiz Ibn Abdil Hadi, one of Ibn Taymiyahs foremost students, refuted As-Subki in his Sarim Al-Munki and excerpts of his refutation are also included in this publication detailing As-Subki's gross misrepresentation of the truth.
View AllClose

MSRP:
Now: £1.25
Was:
54 Questions & Answers about Eid Prayers 16A Islamic fiqh book about Eid prayers and its differences to other prayers, its recommendations, sunnah and prohibitions. Sheikh Muhammad Salih Ibn...
21234

MSRP:
Now: £2.00
Was:
50 Questions & Answers on Islamic Monotheism 28A Believing in the Oneness of ALLAH is a basic fundamental in Islam. This belief establishes the relationship between human beings and their Rubb...
21771

Bengali: 40 Answers in Defence of Islam