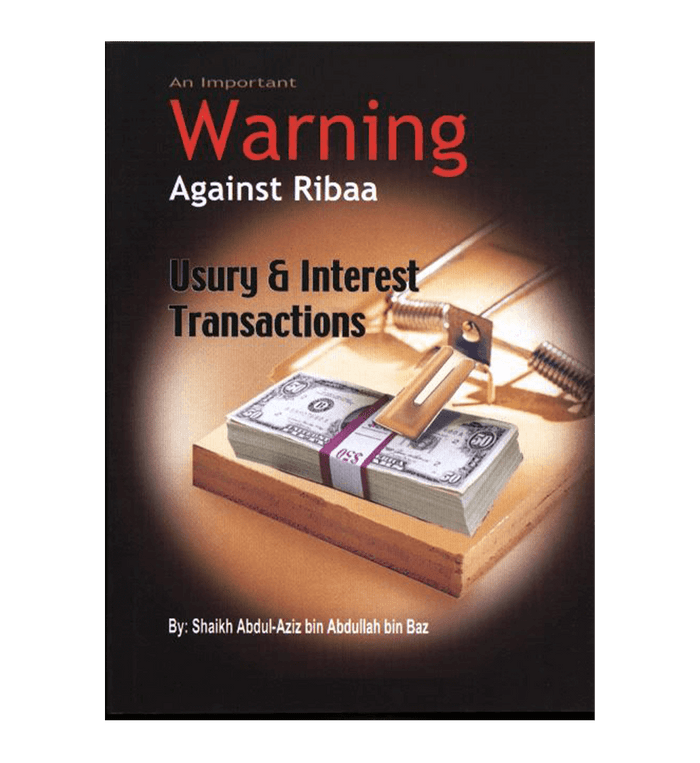 This is a short rebuttal of a research written by Dr. Ibraahim bin Abdullah AnNaasir, in which he tried his best to show the permissibility of most types of Ribaa (usury and interest) transactions that have appeared in recent times in the numerous financial institutions of the world. Hence, we thought English speaking Muslims would benefit from this translated response by Shaikh Abdul-Aziz bin Abdullah bin Baz, one of the noted scholars of our time and a staunch supporter and defender of the Manhaj of the Righteous Predecessors (As-Salaf As-Saalih). Shaikh Ibn Baz's response is a refutation of the misguided effort of Dr. Ibraahim An-Naasir to allow Ribaa transactions.
View AllClose

MSRP:
Now: £2.00
Was:
Al-Waraqat in Usul al-fiqh 05B Al-Waraqat is A renowned Islamic classical text on the subject of Usul al-fiqh. It paves the way for a foundational education on the sources of Islamic law and the...
23172

MSRP:
Now: £5.00
Was:
Father (An Islamic Perspective) 09B Father The perfect gift to give a loved one or indeed to educate oneself as to the significance Islam places on this important relationship through relevant...
23270

A Warning From Wastefulness & Extravagance

MSRP:
Now: £4.95
Was:
A Warning From Wastefulness & Extravagance SL: 01BL1 Said Imaam 'Abdul-'Azeez Ibn 'Abillah Ibn Baaz : ''Allah, the sublime and exalted, has sent down in His Grand Book many aayaat where wasting...
21424

A Warning Against Extremism

MSRP:
Now: £3.50
Was:
A Warning Against Extremism 20A Description from the publisher: This religion is built upon ease as is verified in the saheed that the Prophet صلی الله علیه وآلهِ وسلم said “Indeed this...
21700

Glimpses of the Lives of Righteous People

MSRP:
Now: £5.00
Was:
Glimpses of the Lives of Righteous People This book discusses the teachings of Islam. They have been presented through the glimpses of the lives of the righteous people of the earlier...
23320