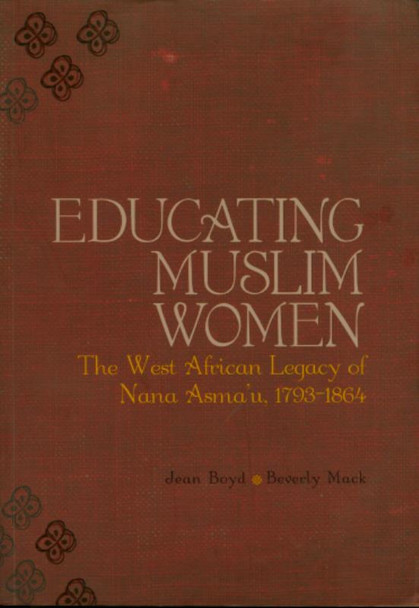 Nana Asma'u was a devout, learned Muslim who was able to observe, record, interpret, and influence the major public events that happened around her. Daughters are still named after her, her poems still move people profoundly, and the memory of her remains a vital source of inspiration and hope. Her example as an educator is still followed: the system she set up in the first quarter of the nineteenth century, for the education of rural women, has not only survived in its homeland—through the traumas of the colonization of West Africa and the establishment of the modern state of Nigeria—but is also being revived and adapted elsewhere, notably among Muslim women in the United States. This book, richly illustrated with maps and photographs, recounts Asma'u's upbringing and critical junctures in her life from several sources, mostly unpublished: her own firsthand experiences presented in her writings, the accounts of contemporaries who witnessed her endeavors, and the memoirs of European travelers. For the account of her legacy the authors have depended on extensive field studies in Nigeria, and documents pertaining to the efforts of women in Nigeria and the United States, to develop a collective voice and establish their rights as women and Muslims in today's societies. Beverley Mack is an associate professor of African studies at the University of Kansas. She is co-editor (with Catherine Coles) of Hausa Women in the Twentieth Century and co-author (with Jean Boyd) of The Collected Works of Nana Asma'u, 1793–1864 and One Woman's Jihad: Nana Asma'u Scholar and Scribe
View AllClose

A Piece Of Advice & Admonition For The Women

MSRP:
Now: £7.95
Was:
A Piece Of Advice & Admonition For The Women 11A It was certainly from the guidance of the Messenger of Allaah to specifically address the women with admonishments and reminders, just as is found...
22811

The Biography of the Noble Prophet (PBH) series (20 books)

MSRP:
Now: £5.00
Was:
Qaida Baghdadi Al Arabiyah Qaida Baghdadi The book uses a gradual system in teaching the alphabet and reading from using the letters, to forming the word, to forming an Arabic sentence
23901

MSRP:
Now: £4.50
Was:
Al Qaida Nooraniah (Large) Arabic Large Colour Print. Learn to Read Arabic Uthmani Script Noorani Qaida has been popular for decades in large parts of the Muslim world. Note : this is not the One...
23899

MSRP:
Now: £2.50
Was:
Al Qaida Nooraniah (Small) Arabic Large Colour Print. Learn to Read Arabic Uthmani Script Noorani Qaida has been popular for decades in large parts of the Muslim world. Note : this is not the One...
23900