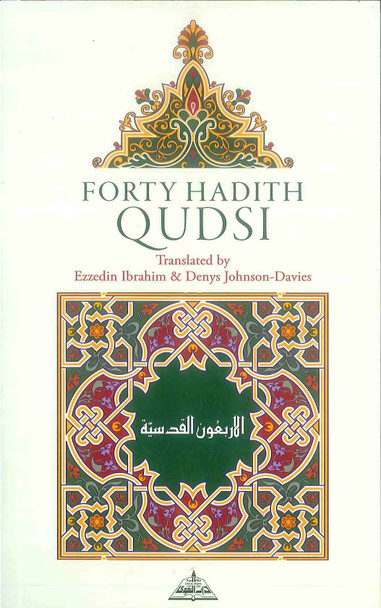 SL: 013
Hadith Qudsi (Sacred hadith) are those sayings of the Prophet Muhammad صلی الله علیهِ وآلهِ وسلم divinely communicated to him, though the actual wording need not necessarily be that of the Almighty. The present collection has been compiled from all the available books of hadith. The forty chosen are all well authenticated and present many of the doctrinal, devotional and ethical elements of Islam. A scholarly introduction deals fully with the subject and shows the way in which Sacred Hadith differ from the Holy Qur'an and Prophetic hadith. The selection and translations have been made by two scholars whose previous translation on an- Nawawi's forty hadith gained wide approval for its accuracy and readability. The present book, a companion volume to an- Nawawi's forty Hadith, has been printed in similar format, with the original Arabic text given alongside the English translation. EZZEDIN IBRAHIM: Born 1928 in Cairo, he first studied Arabic literature at Cairo University, later taking his doctorate at London. He taught and held educational posts in Libya, Syria and Qatar before becoming, in 1967, Professor of Arabic literature at Riyad University in Saudi Arabia. Active in Islamic affairs, he is engaged in the work of the Islamic Conference and other similar organisations. At present he is the Cultural advisor to the President of the United Arab Emirates and lives in Abu Dhabi. DENYS JOHNSON - DAVIES: Born in 1922 in Canada, he studied Arabic at London and Cambridge Universities and later taught at Cairo University. He has published a text book on Arabic translation and ten volumes of short stories, novels and plays translated from modern Arabic literature and is the Editorial Adviser to the 'Arab Authors' series published by Heinemann. He previously founded and edited a quarterly literary magazine in Arabic. At present he lives in Cairo.
View AllClose

Forty Hadeeth On The Call To Islam And The Caller

MSRP:
Now: £3.00
Was:
Forty Hadeeth On The Call To Islam And The Caller 07B These forty ahaadeeth explain in brief, the methodology (manhaj) of the Prophet (SAW) in calling to Allaah and that is an established and...
21203

MSRP:
Now: £4.50
Was:
Forty Days and Forty Nights... in Yemen : A Journey to Tarim, the City of Light 20B Tarim is the setting of a forty day Dowra (intensive course in traditional Islamic sciences)that was attended by...
21244

Forty Solutions to your Marriage Problems

MSRP:
Now: £2.75
Was:
Forty Solutions to your Marriage Problems 16B This book goes through some solutions to solving your marriage problems. Some very beneficial advice is given.
21289

MSRP:
Now: £9.50
Was:
Forty Hadith on Islam This work covers, the Islamic creed, Pillars of Islam, Lawful & Unlawful, Piety and Righteousness, with commentary of Imam al-Ajurri. Anumber of scholars throughout Muslim...
23577

MSRP:
Now: £6.00
Was:
An Nawawi’s 40 Hadith Imam Nawawi had a very short life of 44 years, but even during this short period, he wrote a large number of books on various subjects. Nearly every work is a masterpiece...
23776