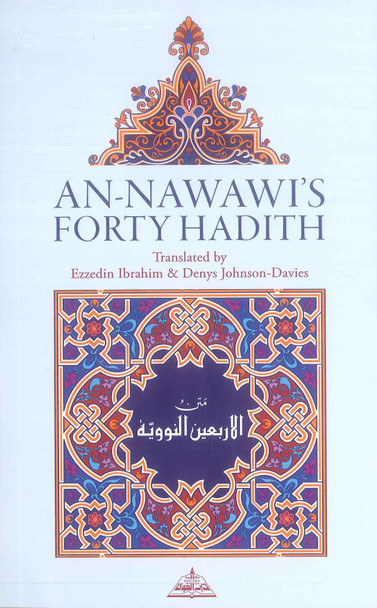 The Compiler of this short book of hadith (the sayings of the Prophet Muhammed صلی الله علیهِ وآلهِ وسلم ) was the Imam an Nawawi. Born in 1233 A.D in the Syrian village of Nawa, south of Damascus, he enjoyed during his lifetime a high reputation as a jurists and scholar of hadith. Having lived a Frugal life dedicated to scholarship, an-Nawawi died at his birthplace in the year 1277. The present selection is generally regarded as the most popular anthology and the best introduction to the study of the Prophet صلی الله علیهِ وآلهِ وسلم sayings which, together with the Holy Qur'an, contain the essential teaching of Islam. EZZEDIN IBRAHIM: Born 1928 in Cairo, he first studied Arabic literature at Cairo university, later taking his doctorate at London. He taught and held educational posts in Libya, Syria and Qatar before becoming, in 1967, Professor of Arabic literature at Riyad University in Saudi Arabia. Active in Islamic affairs, he is engaged in the work of the Islamic Conference and other similar organizations. At present he is the Cultural advisor to the President of the United Arab Emirates and lives in Abu Dhabi. DENYS JOHNSON - DAVIES: Born in 1922 in Canada, he studied Arabic at London and Cambridge Universities and later taught at Cairo University. He has published a text book on Arabic translation and ten volumes of short stories, novels and plays translated from modern Arabic literature and is the Editorial Adviser to the 'Arab Authors' series published by Heinemann. He previously founded and edited a quarterly literary magazine in Arabic. At present he lives in Cairo.
View AllClose

MSRP:
Now: £4.95
Was:
Forty Hadith Qudsi SL: 013 Hadith Qudsi (Sacred hadith) are those sayings of the Prophet Muhammad صلی الله علیهِ وآلهِ وسلم divinely communicated to him, though the actual wording need not...
21572

MSRP:
Now: £75.00
Was:
Encyclopedia of Hadith Forgeries SL: 03AL2 The first comprehensive catalogue and study of hadith forgeries in English. Beacon Books is proud to commence our publishing programme with the...
22093

MSRP:
Now: £5.95
Was:
The Explanation of FORTY HADITH by Imam An-Nawawi SL:07 The collection of Forty hadīth by Imam An-Nawawi (may ALLAH rest his soul in peace), has been known, accepted and appreciated by Muslim...
21999

MSRP:
Now: £50.00
Was:
Commentary On The Forty Hadith Of Al-Nawawi 2-Vol Set SL: 00000 This is a great commentary on a great book.Br. Jamaal Zarabozo is to be congratulated for producing such a scholarly work. He is also...
21467