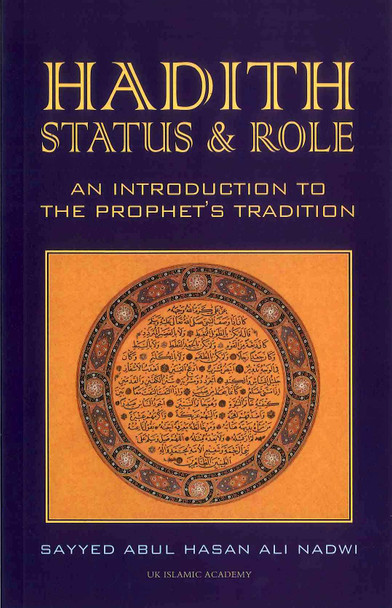 The present book, originally written in fine literary Arabic introduces the Hadith discipline and its development in the early period of Islamic history, up to the production of the six famous anthologies known as the Six Authentic Collections, or al-Sihah al-Sittah.It then tackles the role of Hadith in shaping the social climate in Muslim societies. Together, the two explain the need for Hadith in any Muslim community,and the reliability of its sources.
View AllClose

MSRP:
Now: £4.95
Was:
Mustalah Al-Hadith 15B The rules and terminology of the science of Hadith By: Ash-Shaykh, Al-Allaamah Muhammad bin Salih al-Uthaymin
22446

MSRP:
Now: £2.50
Was:
Collection of An-Nawawi 40 Hadith - Mini booklet Imam Nawawi's compilation of forty hadith of Prophet Muhammad, peace be upon him, are considered by scholars as a compilation conveying the most...
23685

MSRP:
Now: £9.00
Was:
Forty Hadith on Islam This work covers, the Islamic creed, Pillars of Islam, Lawful & Unlawful, Piety and Righteousness, with commentary of Imam al-Ajurri. Anumber of scholars throughout Muslim...
23577

MSRP:
Now: £14.95
Was:
Forty Hadiths on Good Moral Values SL: 01DL1 The statement and actions of our Prophet Muhammad (S.A.W.W) contain much that we need: rules and advice, reminders, examples, warnings and...
21147