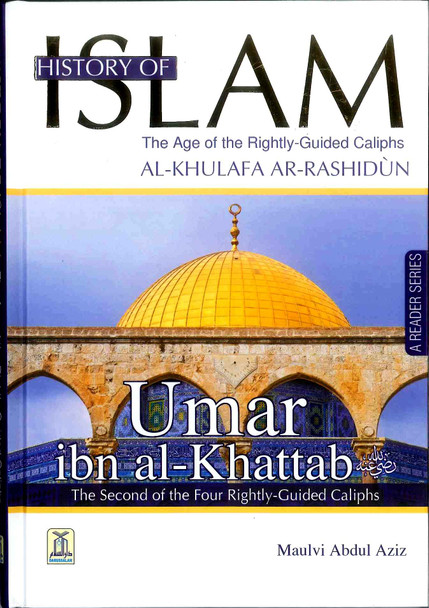 History of Islam - Umar Ibn al Khattab Rightly-Guided Caliphs This is the second volume from this series, which deals with the life of Umar ibn al-Khattab (عمر ابن الخطاب), the second of the Four Rightly-Guided Caliphs. The evaluation of Amir al-Mu'minin Umar al-Farooq, may ALLAH be pleased with him, and his far-sighted policies is captured in a statement attributed to the Prophet صلی الله علیهِ وآله وسلم, 'There were in the nations before you "inspired people", and if there is any one of them in my nation, it is Omar.' Darussalam presents the entire History of Islam to our youth in language that appeals to them, in a simple yet lucid manner. The first four volumes in this series explore Islamic history during the period of the first Four Rightly-Guided Caliphs. Later volumes would be devoted to the History of Islam, down through the ages to modern times, insha'ALLAH. History of Islam - A Reader Series - Suitable for Grade Six (Age group 10+) The Age of the Rightly Guided Caliphs - Al-Khulafa ar-Rashidun Umar bin al-Khattab (R.A): The Second of the Four Rightly Guided Caliphs
View AllClose

MSRP:
Now: £19.95
Was:
Golden Stories of Umar Ibn al-Khattaab (R) 24B This book highlights the interesting and valuable stories of Umar bin al-Khattab's life. In this book the author deliberately left the stories without...
21873

MSRP:
Now: £45.00
Was:
The History of Islam 3 Volume Set 24A History Stands as the most effective and valuable source of putting nations on the course of progress and prosperity and saving them from the path of...
21729